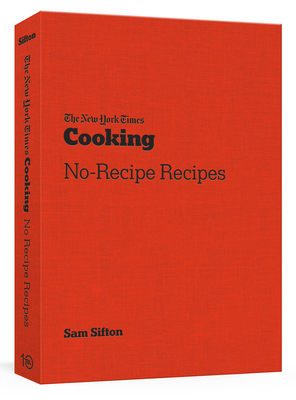 You don’t need a recipe. Really, you don’t.

Sam Sifton, founding editor of New York Times Cooking, makes improvisational cooking easier than you think. In this handy book of ideas, Sifton delivers more than one hundred no-recipe recipes—each gloriously photographed—to make with the ingredients you have on hand or could pick up on a quick trip to the store. You’ll see how to make these meals as big or as small as you like, substituting ingredients as you go.

“Sam Sifton wants you to ditch the recipe and have some fun in the kitchen. The founding editor of NYT Cooking does away with fussy ingredient lists and step-by-step instructions, opting instead for casual, conversational descriptions that allow home cooks to improvise, learn and evolve.”—TimeOut

“The kind of food that is best prepared in loungewear and bears an excellent chic-to-effort ratio.”—Keziah Weir, Vanity Fair

“Every visionary cookbook writer is a bit of a missionary, and Sifton is no exception. In the friendliest way possible, he’s out to win converts. Throw away your crutches, he’s saying, and start cooking by faith alone.”—Laura Shapiro, The Atlantic

“. . . perfect to keep in your back pocket (and the back of your pantry) for those days when you really meant to go to the grocery store, but didn't quite make it.”—Eliza Green, mindbodygreen

“Innovative, fun, and freeing, this outstanding offering will reenergize the creative spirits of novice and experienced home cooks alike.”—Publishers Weekly

Sam Sifton is an assistant managing editor of The New York Times, responsible for culture and lifestyle coverage, and the founding editor of NYT Cooking. Formerly the national news editor, restaurant critic, and culture editor, he joined The Times in 2002 after stints at Talk magazine, New York Press, and American Heritage magazine. He is the author of Thanksgiving: How to Cook It Well and See You on Sunday: A Cookbook for Family and Friends.
Loading...
or support indie stores by buying on