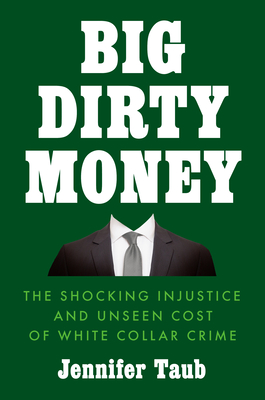 The Shocking Injustice and Unseen Cost of White Collar Crime

"Taub explicitly and persuasively places the breakdown of enforcement and accountability in the context of money and class."--The New York Times

How ordinary Americans suffer when the rich and powerful use tax dodges or break the law to get richer and more powerful--and how we can stop it.

There is an elite crime spree happening in America, and the privileged perps are getting away with it. Selling loose cigarettes on a city sidewalk can lead to a choke-hold arrest, and death, if you are not among the top 1%. But if you're rich and commit mail, wire, or bank fraud, embezzle pension funds, lie in court, obstruct justice, bribe a public official, launder money, or cheat on your taxes, you're likely to get off scot-free (or even win an election). When caught and convicted, such as for bribing their kids' way into college, high-class criminals make brief stops in minimum security "Club Fed" camps. Operate the scam from the executive suite of a giant corporation, and you can prosper with impunity. Consider Wells Fargo & Co. Pressured by management, employees at the bank opened more than three million bank and credit card accounts without customer consent, and charged late fees and penalties to account holders. When CEO John Stumpf resigned in "shame," the board of directors granted him a $134 million golden parachute.

This is not victimless crime. Big Dirty Money details the scandalously common and concrete ways that ordinary Americans suffer when the well-heeled use white collar crime to gain and sustain wealth, social status, and political influence. Profiteers caused the mortgage meltdown and the prescription opioid crisis, they've evaded taxes and deprived communities of public funds for education, public health, and infrastructure. Taub goes beyond the headlines (of which there is no shortage) to track how we got here (essentially a post-Enron failure of prosecutorial muscle, the growth of "too big to jail" syndrome, and a developing implicit immunity of the upper class) and pose solutions that can help catch and convict offenders.

"Taub explicitly and persuasively places the breakdown of enforcement and accountability in the context of money and class . . . Donald Trump is not the ostensible subject of “Big Dirty Money,” Jennifer Taub’s polemic against America’s failure to curb the destructive criminal tendencies of the very rich. Yet the president, his friends and former Trump campaign and administration officials parade through these pages."—The New York Times

"A crisp, engaging account of the many ways that corruption is thriving in the private sector and governments at every level…Taub writes the law like the professor she is (though she is a much better writer than most lawyers)…You can’t read these books without realizing that we are living in an awful time of lax ethical and legal standards.”—The Washington Post

“Blood-boiling…with quippy analysis…Taub proposes straightforward fixes and ways everyday people can get involved in taking white-collar criminals to task. This book raises the stakes even higher for November and is an exigent read for creating a more just society.”—San Francisco Chronicle

“Anyone arguing that white-collar crime is victimless will have to reckon with this new examination by Taub.”—Bloomberg

"A powerful polemic about the dangers of elite impunity. “Elite crime pays. It pays very well,” she warns. The result? An “elite crime spree” that dangerously erodes trust in democracy."—Promarket

"Be prepared to blow your top. It’s likely that you’ll be familiar with most, if not all, of the crimes that Taub details, but having them all in one place is like eating a plate full of habaneros: you’ll get red-faced, bug-eyed, sputtering and pretty righteously hot under the collar."—The Bookworm Sez

"A scathing indictment of white-collar crime and its unpunished practitioners . . . In this steely-eyed examination of these brazen criminals, Taub holds that this lack of effective punishment merely encourages the wealthy to prey on the rest of society . . . A significant manifesto for judicial reform that aims at cracking the cabal of big-money grifters at the top."—Kirkus Reviews (*starred review*)

“The United States is drowning in dirty money; we’ve constructed a two-tiered system of justice, of corruption and campaign finance; of bailouts and bankruptcies. Jennifer Taub ably and cogently strips bare the racism and regulatory failures that have made America’s wealthiest predators too big to fail and too spectacular to jail. Anyone worried about how these failures shape politics, elections, journalism, and justice should take notice.” —Dahlia Lithwick, senior legal editor, Slate

“In the corporate and political worlds, Taub finds a rampant crime wave, touching more than our financial markets and the halls of Congress. It intrudes into our daily lives, threatening our health, food, environment, and well-being. Sweeping and comprehensive, her work culminates in a groundbreaking series of imaginative solutions to refocus our efforts on combatting elite crime to help American society recover.” —Jesse Eisinger, Pulitzer Prize–winning author of The Chickenshit Club

“A stimulating and provocative book that challenges the current administration on its handling of white collar crimes. It sets the stage for change.” —Ellen Podgor, Gary R. Trombley Family White-Collar Crime Research Professor at Stetson University College of Law

“Donald Trump’s time as president has revealed a ruling class that appears untouchable as in authoritarian regimes. But well before that, Trump was used to escaping accountability like other corporate insiders. Jennifer Taub details how this cycle of rewarding bad behavior has consolidated power in the hands of few and hurt our country.” —Amy Siskind, president, The New Agenda

“It’s no accident that African-American citizens can be brutalized or even killed for minor alleged infractions, while corporate wrongdoers escape prosecution or punishment. When we see street corner drug dealers denied bail but crooked pharmaceutical conglomerates payout dividends, we are seeing the justice system work as intended. Taub explains how the rot goes right to the heart of our legal and regulatory systems themselves.” —Elie Mystal, justice correspondent for The Nation

“Taub shines light on fraud, tax evasion and corruption, where wrongdoings can be hard to detect and the bar for creating accountability is too high. She issues a passionate call to action and outlines sensible reforms, at least some of which should resonate broadly and across our political divides.” —Anat Admati, George G.C. Parker Professor of Finance and Economics at Stanford University Graduate School of Business and co-author of The Bankers’ New Clothes: What’s Wrong with Banking and What to Do About It

Jennifer Taub is a legal scholar and advocate whose writing focuses on "follow the money" matters--promoting transparency and opposing corruption. She has testified as a banking law expert before Congress and has appeared on MSNBC's Morning Joe and CNN's Newsroom. Taub was the Bruce W. Nichols Visiting Professor of Law in fall 2019 at Harvard Law School and is a professor of law at the Western New England University School of Law. She is a graduate of Yale College and Harvard Law School.
Loading...
or
Not Currently Available for Direct Purchase