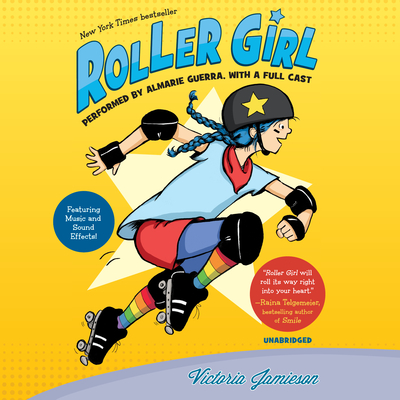 The Newbery Honor Award Winner and New York Times bestseller Roller Girl is a heartwarming tale about friendship and surviving junior high through the power of roller derby—perfect for fans of Raina Telgemeier's Smile!

* "Jamieson captures this snapshot of preteen angst with a keenly decisive eye, brilliantly juxtaposing the nuances of roller derby with the twists and turns of adolescent girls' friendships...Full of charm and moxie—don't let this one roll past." —Kiruks, starred review

* "Readers will stand up and cheer."—Publishers Weekly, starred review


"Visually, Roller Girl is very appealing — think Lynn Johnston with a modern edge — but it's the storytelling that really sets this graphic novel apart…A great choice for tween girls, whether they're remaking themselves, renegotiating friendships or just weathering the stormy seas of early adolescence." —Chicago Tribune

Victoria Jamieson received her BFA in Illustration from the Rhode Island School of Design. She worked as a children’s book designer before moving to Portland and becoming a freelance illustrator. She has also worked as a portrait artist aboard a cruise ship, and has lived in Australia, Italy, and Canada. She maintains a not-so-secret identity as Winnie the Pow, skater with the Rose City Rollers roller derby league.
Loading...
or support indie stores by buying on