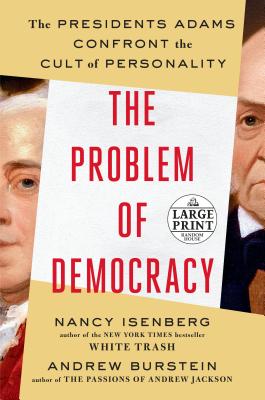 The Problem of Democracy

The Presidents Adams Confront the Cult of Personality

How the father and son presidents foresaw the rise of the cult of personality and fought those who sought to abuse the weaknesses inherent in our democracy, from the New York Times bestselling author of White Trash.

John and John Quincy Adams: rogue intellectuals, unsparing truth-tellers, too uncensored for their own political good. They held that political participation demanded moral courage. They did not seek popularity (it showed). They lamented the fact that hero worship in America substituted idolatry for results; and they made it clear that they were talking about Benjamin Franklin, George Washington, Thomas Jefferson, and Andrew Jackson.

When John Adams succeeded George Washington as President, his son had already followed him into public service and was stationed in Europe as a diplomat. Though they spent many years apart--and as their careers spanned Europe, Washington DC, and their family home south of Boston--they maintained a close bond through extensive letter writing, debating history, political philosophy, and partisan maneuvering.

The problem of democracy is an urgent problem; the father-and-son presidents grasped the perilous psychology of politics and forecast what future generations would have to contend with: citizens wanting heroes to worship and covetous elites more than willing to mislead. Rejection at the polls, each after one term, does not prove that the presidents Adams had erroneous ideas. Intellectually, they were what we today call "independents," reluctant to commit blindly to an organized political party. No historian has attempted to dissect their intertwined lives as Nancy Isenberg and Andrew Burstein do in these pages, and there is no better time than the present to learn from the American nation's most insightful malcontents.

Praise For The Problem of Democracy: The Presidents Adams Confront the Cult of Personality…

“Although the current occupant of the White House is nowhere mentioned by name in this book, his prodigious shadow looms large. The trends that so distressed the Adamses in the nation’s early years have intensified to a degree they could scarcely have imagined, thanks to virulent social media, the injection of vast sums of money into American campaigns, a politicized judiciary and rising economic inequality. We can only be grateful that father and son were spared this vision of their worst fears coming true.”—The New York Times Book Review

"Ambitious and beautifully written...This book offers an abundance of riches. It is both biography and family history of two brilliant men who were deeply concerned about the long-range prospects of their country...Historians Nancy Isenberg and Andrew Burstein show us how the presidents Adams' healthy skepticism about human nature and the fragility of government have caused them to be misunderstood and underappreciated."—BookPage

"[The Adamses’] stubborn, idealistic approaches to government left a lasting imprint on institutions that are being routinely tested and challenged 200 years later.”—NPR

“The Problem of Democracy is the first dual biography of the presidents Adams. Their entwined stories are told with authority and style by co-authors Andrew Burstein, a prolific historian of the early republic, and Nancy Isenberg, biographer of Aaron Burr and author of White Trash (2016), a pioneering examination of class in America. As ambitious as their protagonists, Mr. Burstein and Ms. Isenberg offer a frankly revisionist “lesson in myth busting,” portraying their subjects both as latter-day Ciceros and as victims of the “cult of personality” they blame for distorting modern-day elections as well as historical estimates of presidential performance.”—The Wall Street Journal

“[A]n informative, often moving, account of the intimate relationship between John and John Quincy Adams…Isenberg and Burstein make a compelling case that the Adamses’ ideas, policies and leadership deserve our attention. As a guide to, if not a model for, addressing the flaws in our democratic processes, including the power of parties and the role celebrity plays in our political culture.”—Pittsburgh Post Gazette

"Fascinating...Isenberg and Burstein find an eerie prescience in the warnings of the Adams presidents, who cautioned that democracy would be ruled by those with the “deepest purse” and that democracy’s great risk was demagoguery...[The Problem of Democracy] is also keenly astute about political theory, politics of the day, and the twisted roots of American democracy."—The National Book Review

"In this daring, lucid, and provocative book, Nancy Isenberg and Andrew Burstein challenge founding myths to reveal democracy as an incomplete, contested, and often distorted ideal.  By exploring the failed presidencies and probing ideas of John and John Quincy Adams, The Problem of Democracy exposes the deep roots of contemporary demagogues and their polarizing deceptions."—Alan Taylor, author of American Revolutions: A Continental History, 1750-1804

“Who better knows the byways between the Revolution and the 1840s, who else could address the politics and the personalities of both John and John Quincy Adamses with such wisdom and verve?  Better than any previous Adams chroniclers, they have identified the essential theme that persisted through both men's lives: one which concerns us now more than ever.” —David Waldstreicher, editor of The Diaries of John Quincy Adams, 1779-1848

“This eye-opening investigation into our country’s entrenched social hierarchy is acutely relevant.”—O, The Oprah Magazine

“An eloquent synthesis of the country’s history of class stratification.”—The Boston Globe

“A bracing reminder of the persistent contempt for the white underclass.”—The Atlantic

“Isenberg . . . has written an important call for Americans to treat class with the same care that they now treat race…Her work may well help that focus lead to progress.”—Time


Praise for Madison and Jefferson:

“A monumental account of a fifty-year political partnership… a dual biography of uncommon merit… a superb book that greatly deepens our understanding.” —Kirkus Reviews

Nancy Isenberg is the T. Harry Williams Professor of American History at Louisiana State University, and the author of the New York Times bestseller White Trash: The 400-Year Untold History of Class in America, and two award-winning books, Fallen Founder: The Life of Aaron Burr and Sex and Citizenship in Antebellum America. She is the coauthor, with Andrew Burstein, of Madison and Jefferson.

Andrew Burstein is the Charles P. Manship Professor of History at Louisiana State University, a noted Jefferson scholar, and the author of ten previous books on early American politics and culture. These include The Passions of Andrew Jackson, Jefferson's Secrets, and Democracy's Muse. He and Nancy Isenberg have coauthored regular pieces for national news outlets.