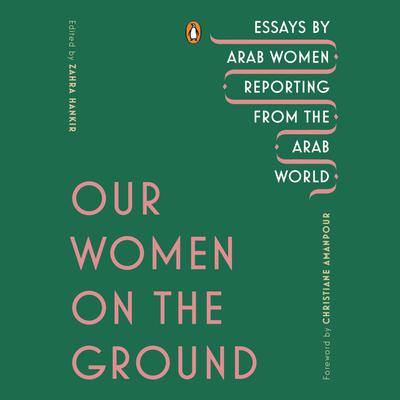 Our Women on the Ground (Digital Audiobook)

Essays by Arab Women Reporting from the Arab World

Nineteen Arab women journalists speak out about what it’s like to report on their changing homelands in this first-of-its-kind essay collection, with a foreword by CNN chief international correspondent Christiane Amanpour

A growing number of intrepid Arab and Middle Eastern sahafiyat—female journalists—are working tirelessly to shape nuanced narratives about their changing homelands, often risking their lives on the front lines of war. From sexual harassment on the streets of Cairo to the difficulty of traveling without a male relative in Yemen, their challenges are unique—as are their advantages, such as being able to speak candidly with other women at a Syrian medical clinic or with men on Whatsapp who will go on to become ISIS fighters, rebels, or pro-regime soldiers.

In Our Women on the Ground, nineteen of these women tell us, in their own words, about what it’s like to report on conflicts that (quite literally) hit close to home. Their daring and heartfelt stories, told here for the first time, shatter stereotypes about the region’s women and provide an urgently needed perspective on a part of the world that is frequently misunderstood.

Zahra Hankir is a Lebanese-British journalist who writes about the intersection of politics, culture, and society in the Middle East. Her work has appeared in Vice, BBC News, Al Jazeera English, Businessweek, Roads & Kingdoms, and Literary Hub, among others. She was awarded a Jack R. Howard Fellowship in International Journalism to attend the Columbia Journalism School and holds degrees in politics and Middle Eastern studies.

Christiane Amanpour (foreword) is CNN’s chief international anchor and host of the network’s award-winning, flagship global affairs program Amanpour, which also airs on PBS in the United States. She is based in the network’s London bureau. Christiane’s illustrious career in journalism spans more than three decades. After joining CNN in 1983, Amanpour rose through the organization, becoming the network's leading international correspondent reporting on international crises in the Gulf War, Iraq, Afghanistan, North Korea, Palestinian territories, Iran, Sudan, Israel, Pakistan, Somalia, Rwanda, the Balkans, Egypt, and Libya. Amanpour has interviewed most of the top world leaders over the past two decades and has received every major broadcast award, including an inaugural Television Academy Award, eleven News and Documentary Emmys, four Peabody Awards, and nine honorary degrees. In 2014, she was inducted into the Cable Hall of Fame and in 2018 was inducted into the Broadcasting & Cable Hall of Fame. She is a member of the American Academy of Arts and Sciences, a Commander of the Most Excellent Order of the British Empire, an honorary citizen of Sarajevo, and a UNESCO Goodwill Ambassador. Amanpour is a graduate of the University of Rhode Island.