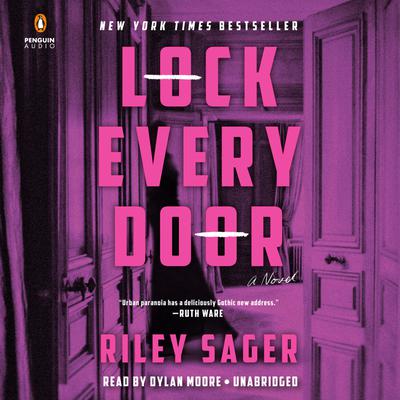 “Looking for a suspense novel that will keep you up until way past midnight? Look no further than Lock Every Door, by Riley Sager.”—Stephen King

No visitors. No nights spent elsewhere. No disturbing the rich and famous residents. These are the rules for Jules Larsen’s new job apartment sitting at the Bartholomew, one of Manhattan’s most high-profile buildings. Recently heartbroken—and just plain broke—Jules is taken in by the splendor and accepts the terms, ready to leave her past life behind.

As she gets to know the occupants and staff, Jules is drawn to fellow apartment sitter Ingrid, who reminds her so much of the sister she lost eight years ago. When Ingrid confides that the Bartholomew has a dark history hidden beneath its gleaming façade, Jules brushes it off as a harmless ghost story—until the next day when Ingrid seemingly vanishes.

Searching for the truth, Jules digs deeper into the Bartholomew’s sordid past. But by uncovering the secrets within its walls, Jules exposes herself to untold terrors. Because once you’re in, the Bartholomew doesn’t want you to leave....

Lock Every Door is the third thriller from Riley Sager, the pseudonym of an author who lives in Princeton, New Jersey. Riley's first novel, Final Girls, was a national and international bestseller that has been published in more than two dozen countries, won the ITW Thriller Award for Best Hardcover Novel, and is currently being developed into a feature film by Universal Pictures. Sager's second novel, The Last Time I Lied, was a New York Times bestseller.