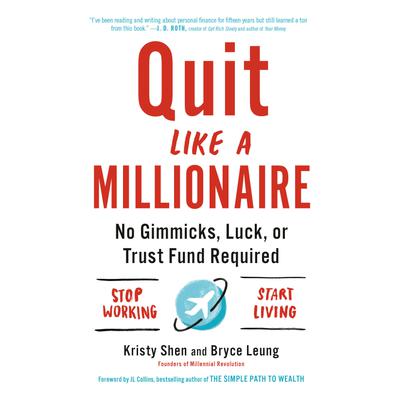 From two leaders of the FIRE (Financial Independence, Retire Early) movement, a bold, contrarian guide to retiring at any age, with a reproducible formula to financial independence

A bull***t-free guide to growing your wealth, retiring early, and living life on your own terms

Kristy Shen retired with a million dollars at the age of thirty-one, and she did it without hitting a home run on the stock market, starting the next Snapchat in her garage, or investing in hot real estate. Learn how to cut down on spending without decreasing your quality of life, build a million-dollar portfolio, fortify your investments to survive bear markets and black-swan events, and use the 4 percent rule and the Yield Shield--so you can quit the rat race forever. Not everyone can become an entrepreneur or a real estate baron; the rest of us need Shen's mathematically proven approach to retire decades before sixty-five.

*Includes a PDF of detailed charts, graphs, formulas, illustrated strategies, and the complete appendices from the book, to help reach financial independence and retire early.

KRISTY SHEN and BRYCE LEUNG are Canada's youngest retirees, and the founders of Millennial-Revolution.com. They have been featured in the New York Times, CBC, the Huffington Post, CNBC, BNN, Business Insider, and Yahoo Finance. An interview with them is one of the most shared stories in CBC history, and their viral video on CBC's On the Money has garnered 4.5 million views. Kristy is a frequent speaker at the yearly Chautauqua financial retreat in Europe and Ecuador, and she will be featured in a documentary about the Financial Independent Retire Early movement (FIRE), Playing with FIRE, slated to be released in 2019.