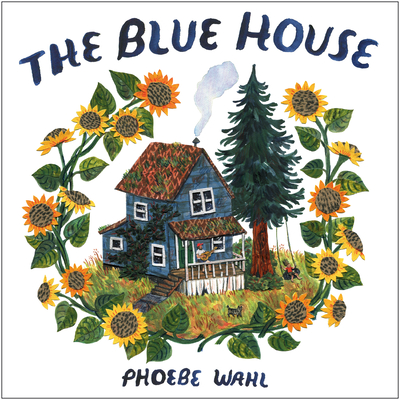 In the tradition of Virginia Lee Burton's The Little House comes a heartfelt story about a father and son learning to accept the new while honoring and celebrating the old.

For as long as he can remember, Leo has lived in the blue house with his dad, but lately the neighborhood is changing. People are leaving, houses are being knocked down, and shiny new buildings are going up in their place. When Leo and his dad are forced to leave, they aren't happy about it. They howl and rage and dance out their feelings. When the time comes, they leave the blue house behind--there was never any choice, not really--but little by little, they find a way to keep its memory alive in their new home.

PHOEBE WAHL's work focuses on themes of comfort, nostalgia, and intimacy with nature. She grew up unschooled in Washington State and credits her free-spirited childhood in the Northwest for much of her inspiration and work ethic. She works in a variety of mediums, from watercolor and collage to fabric sculpture. Phoebe graduated from Rhode Island School of Design with a BFA in illustration and currently lives in Bellingham, Washington.


Praise For The Blue House…

“An absolute treasure for anyone who has ever moved.” —Kirkus Reviews, Starred Review

“An affecting story about loss and starting over.” —The Horn Book, Starred Review

"This powerfully relevant, moving portrayal of a loving single-parent family during a period of unexpected change and transition is a must-have." —School Library Journal, Starred Review

"The Blue House is an immensely satisfying picture book about a family acclimating to a big change.” --BookPage

“Refreshing.... This is a pragmatic alternative to Virginia Lee Burton’s The Little House, and kids will be glad to see that Leo and his dad negotiate their changing neighborhood. Make sure audiences get a look at opening and closing endpapers to see where Leo’s move took him.” —The Bulletin
or support indie stores by buying on
Copyright © 2020 American Booksellers Association