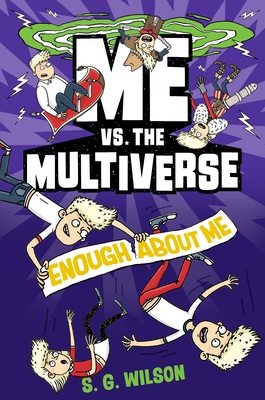 Can plain old Average Me fix the rip in the multiverse? The Mes are back in this hilarious second book in the sci-fi comedy series for fans of Stuart Gibb's Moon Base Alpha and quirky animated shows like Rick and Morty and Regular Show.

Saving the multiverse starts with another origami note: Make it here, pronto.

This time Meade Macon, aka Average Me, knows that parallel dimensions are real. He's met dozens of his counterparts from other Earths. What he doesn't know is that they're all about to get zapped out of existence.

On Earth Zero, a rip in the multiverse is spreading to other realities and causing chaos wherever it appears. And the different versions of Meade--the Mes--are caught in the middle! Motor Me, Resist Me, and Hollywood Me just want to go back home to their own Earths. The only way to do that is to repair the rip. Once again, it's up to Average Me! But if Average is going to fix the multiverse, he just might have to team up with his archnemesis . . . Meticulous Me.

Praise For Me vs. the Multiverse: Enough About Me…

Praise for Pleased to Meet Me: