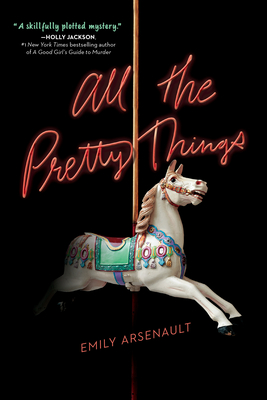 All the Pretty Things

"A skillfully plotted mystery, bursting with the glare and feverish energy of its summer amusement park setting. The atmosphere creeps up on you...[and] dark secrets await."--Holly Jackson, #1 New York Times bestselling author of A Good Girl's Guide to Murder

For fans of Sadie and One of Us Is Lying comes a thriller about a boy who turns up dead under suspicious circumstances and the one girl who may be the key to solving the mystery of his untimely death.

For Ivy, summer means roller-coaster season, spinning cotton candy at the Fabuland amusement park, and hanging out with her best friend, Morgan. But this summer is different.

One morning, Morgan finds a dead body. It's their former classmate Ethan, who was alive and working at Fabuland only the day before. To make matters worse, Morgan is taken to a hospital psych ward only days later, and she's not saying much--not even to Ivy.

The police claim that Ethan simply took a bad fall, but Ivy isn't convinced and realizes it's up to her to get answers. What she finds is unsettling--it's clear that some people aren't being honest about Ethan's last night at Fabuland. Including Morgan. And the more secrets Ivy uncovers, the closer she gets to unraveling dark truths that will change her life forever.

"A dark and timely thriller."-Amelia Brunskill, author of The Window

Praise For All the Pretty Things…

“All the Pretty Things is a skillfully plotted mystery, bursting with the glare and feverish energy of its summer amusement park setting. The atmosphere creeps up on you, wraps you up, and transports you to Fabuland with Ivy, where you’ll discover that among the roller-coasters and cotton-candy stalls, dark secrets await.” —Holly Jackson, New York Times bestselling author of A Good Girl’s Guide to Murder

“A dark and timely thriller that explores the messy bonds of friendship and family. It kept me guessing until its satisfying, heartbreaking conclusion.” —Amelia Brunskill, author of The Window

"Taking turns right up to the end...this is more than a thriller, filled with mystery and intrigue. It also speaks to the complexity and internalized struggle of guilt, loss, and loving someone you can’t trust." —SLJ

"Atmospheric,...the dark treatment of a unique setting will be enough to intrigue readers looking for something in the vein of Courtney Summers' Sadie." —Booklist

Emily Arsenault is the author of several literary mysteries, including In Search of the Rose Notes, a Wall Street Journal Best Book of the Year; The Broken Teaglass, a New York Times Notable Crime Book; and The Evening Spider. She lives in Shelburne Falls, Massachusetts, with her husband and daughter. All the Pretty Things is her second novel for young adults. To learn more about Emily and her books go to emilyarsenault.com or follow her on Facebook.
Loading...
or support indie stores by buying on