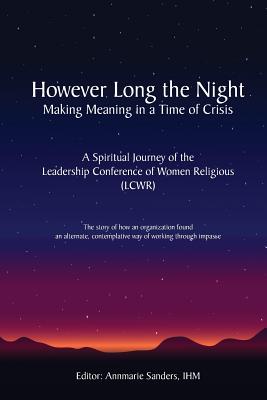 However Long the Night

Making Meaning in a Time of Crisis: A Spiritual Journey of the Leadership Conference of Women Religious (LCWR)

This is the story of what was learned by a large national organization, the Leadership Conference of Women Religious (LCWR), during a six-year crisis (2009-2015). A high-ranking and very powerful Vatican office suddenly and very publicly confronted the organization with forceful questions and negative assumptions about the foundation of the lives of Catholic sisters. The conflict grew more intense midway through those years. The Vatican office threatened the autonomy and even the existence of the organization, an organization on which the great majority of US Catholic sisters rely for many kinds of resources, supports, and connections. The experience rocked LCWR's officers, its hundreds of members, and the approximately 60,000 sisters who belonged to member congregations at that time. Yet the ultimate resolution benefitted everyone. How did that happen? This book answers that question. It not only explains how the organization worked through a very difficult situation, but it provides spiritual grounding, useful information, and perhaps some inspiration and hope to anyone working through a situation of conflict, polarization, or even impasse in their own personal, professional, family, community, neighborhood, or organizational settings. The situation on which this book is based began in 2009 when the Vatican's Congregation for the Doctrine of the Faith (CDF) shocked LCWR with its 2009 announcement that it was beginning a "doctrinal assessment" - an investigation of LCWR's faithfulness to the church to which women religious have dedicated their lives. The organization was stunned as well when CDF announced in 2012 that it had concluded its study and was appointing an archbishop who would be assisted by two other bishops to oversee a reform of LCWR as a result of its investigation. LCWR's identity, autonomy, and survival were in question. LCWR's members were devastated. No one involved with the situation could see a clear or obvious path toward resolution. During those years and since that time LCWR was asked by many to tell the story of how the organization and how its leaders navigated this time of tremendous obvious risk as well as less visible personal pain and, ultimately, blessing. Reporters have wanted the organization to offer an expos of the unrevealed details of what provoked this investigation and of "who said what when" in the very slow process of its resolution. This is not that tell-all book. This is a serious effort to describe what LCWR's leaders learned personally and as an organization about how to weather a crisis in ways that create a new and better reality. This book is the product of reflection over time. The authors had long pondered if there was any benefit to their telling LCWR's story and their own stories to the public. Their reticence was palpable primarily because it had been such a sacred journey for them and they wanted it to be respected as such. Conscious of the dire national and international conflict existent today, the authors chose to risk telling their story with the hope that it could offer a way forward for others. Readers will see how these women handled the challenges that confront any leaders in crises - what goals to pursue, what overall strategies to use, when to share or withhold information within the organization and with the public, how to find or create a solution. They will also see how they called on rich spiritual and cultural traditions. The formal methods, processes, and practices used are readily translatable for use in other communities and organizations. These learnings are practical options that may help others to create new and better realities in their own parts of the world.