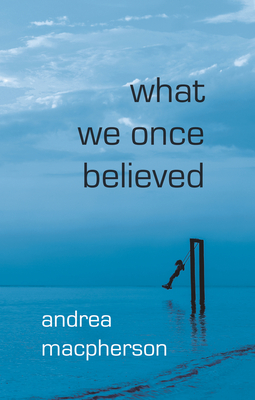 What We Once Believed (Paperback)

A coming-of-age novel contrasting a daughter's disappointment in her mother's abandonment with the generational differences around feminist values.Summer 1971. While women demand equality, protests erupt over the Vietnam War, and peace activists march, adolescent Maybe Collins' life in quiet Oak Bay is upended by the appearance of her mother, who disappeared nine years earlier.And with her return comes another surprise: she's written a best-selling memoir called THE OTHER MOTHER, about motherhood and Women's Liberation, which gives only passing reference to Maybe's existence. Camille, now an acclaimed author, is distant and confounding, and Maybe tries to piece together her mother's life-why she left, the truth behind her famous memoir, and the future of their fractured relationship.As Maybe searches for her place, so do the other women in her life: her independent and unchangeable grandmother, Gigi; her best friend's mother, Robin, who struggles with her roles as wife and stay-at-home mother; and Mary Quinn, a successful artist new to Lear Street, who seems to live only by her own rules. Their stories and struggles define how Maybe sees her choices as a woman and how she'll navigate a world that is dramatically shifting every day.But when Maybe discovers that her mother is writing another book-a book about her return-the betrayal is fierce and painful, and Maybe resolves to teach Camille a lesson that will change them all forever.

Andrea MacPherson is the author of five books: two novels, BEYOND THE BLUE and WHEN SHE WAS ELECTRIC, and three poetry collections, ELLIPSES, AWAY, and NATURAL DISASTERS. WHEN SHE WAS ELECTRIC placed number 6 on CBC Canada Reads: People's Choice, and NATURAL DISASTERS was long listed for the ReLit Awards. Andrea holds an MFA from the Creative Writing Department at the University of British Columbia, where she was Editor of PRISM INTERNATIONAL. She has also acted as the Reviews Editor for EVENT MAGAZINE. Currently an Associate Professor at the University of the Fraser Valley, Andrea teaches creative writing and literature. She lives in Cloverdale with her family.

Praise For What We Once Believed…

"Andrea MacPherson’s new book, What We Once Believed, is a beautifully rendered novel that untangles the lives of Maybe, a girl on the brink of adolescence, and the women who surround her. Set in the 1970s, Maybe, along with her mother, grandmother and neighbours, struggles with political change, intimacy and the great, wide open future. With a sharp eye for detail and daily hypocrisies, Andrea has written a deeply complex story of women on the social, geographic and emotional edge." — Jen Sookfong Lee, author of The Conjoined

"An apt snapshot of a multi-generational group of women – Bechdel-test approved – struggling to heal from life's inevitable traumas, What We Once Believed is a beautiful summer read." — Quill & Quire

"MacPherson is clearly a poet, and her lyricism makes for engaging prose…" — Rachel Carlson, The Winnipeg Review

"MacPherson's writing is impeccable. Her metaphors and images are beautiful and, I suspect, will ring true for many women readers…" — Rachel Edmonds, Understorey Magazine
or support indie stores by buying on
Copyright © 2020 American Booksellers Association