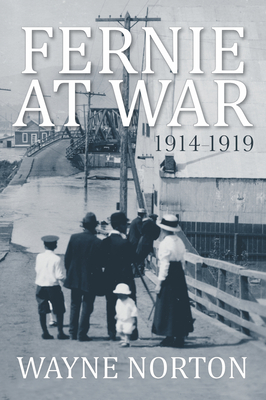 Fernie, a small community located in BC’s Kootenay region, entered the First World War in 1914 with optimism and a sense of national pride—it emerged five years later having experienced staggering losses and multiple controversies that threatened to tear their community apart.

As a resource-based economy with unusually large and varied immigrant populations, and exceptionally high recruitment levels, Fernie was profoundly affected by conflicting impulses of labour, loyalty and ethnicity. Demands for internment of enemy aliens, resistance to prohibition and moral reform, the consequences of natural and man-made disasters, the unprecedented banning of recruitment, and the western labour revolt were all issues that contributed to a war-time experience for Fernie that was more dramatic and more revealing of underlying tensions than that of any other Canadian community.

In his new book, Fernie at War, historian and author Wayne Norton explores what it meant to live in Fernie during those confusing and divisive years.

Wayne Norton is a writer, publisher and historical consultant who, for many years, was a teacher in Fort Rupert, Kamloops and England. He has written extensively on a variety of topics including music of the First World War, historic women’s ice hockey, prairie settlement, public health, and the local histories of Kamloops and Fernie. He was a research consultant for the Indian Residential School Process and has published articles in British Columbia History, The Globe and Mail, BC Studies and The Vancouver Sun. Norton has also published eight books, most recently Women on Ice: The Early Years of Women’s Hockey in Western Canada with Ronsdale Press.

"Fernie at War is a fine example of how labour and popular history can be presented in an accessible and highly readable manner. The book compels those interested in preserving BC’s rich labour heritage to redouble their efforts in locating and preserving the union records that do not already exist in archives. They are the raw material of future histories such as this." — Donna Sacuta, Executive Director of the BC Labour Heritage Centre, in Our Times

"Fernie at War is undoubtedly the most important historic examination of the Great War years’ impact on this town ever done. Norton's careful and thorough research is key to helping the average 'Fernieite' understand how events unfolded through those divisive six years." — John Kinnear, The Fernie Free Press

"Norton's discussions on prohibition may be the best illustration of the risks entailed in an attempt to sever a community from its broader geographical context for individualized study … The quantity and quality of Norton's research, and the conclusions drawn therefrom, have resulted in a valuable study. And this work raises an important question, as good works of history should. Norton captured the significance of daily life in a small but rather complex community." — Keith Regular, The Ormsby Review

"Wayne Norton provides a fascinating story of a British Columbia resource town navigating its way through the tribulations of the Great War. In so doing, he adds to the small but growing body of works that examine the home front experiences of Canadians during the world wars […] This is a book with many strengths…" — R. Scott Sheffield, BC Studies

"Norton's book not only sets a new standard for local histories, it causes us to reconsider the history of every community." — Dave Obee, Times Colonist

"Fernie at War provides an important contribution to our provincial—and national—history…. [It] succeeds in offering a carefully researched, lovingly crafted regional history…" — BC History
or support indie stores by buying on
Copyright © 2020 American Booksellers Association