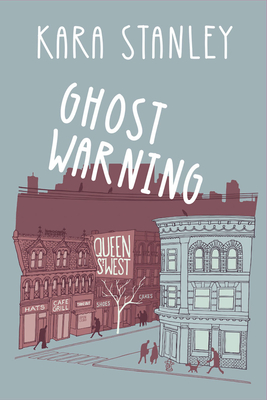 On the day that Lou James finds her father dead on the garage floor, she leaves her small hometown and heads for Toronto on a Greyhound, initiating a series of events that will reshape her life. Lou moves in with her brother and begins a new existence all the while trying to make sense of her father’s unexpected death and the sudden loss of her place in the world.

Amidst the strangeness of life in Toronto, where vibrancy and violence mix, Lou builds a small community: Isabelle, the welcoming neighbour and new best friend; Sal, Lou’s angry but big-hearted godfather; despairing Donnie, a troubled fledgling drug dealer; dreamy Finn, lead singer in a post-punk band, and mysterious Stella, the old woman who spends her days seated on the back steps of a locked church door surrounded by plastic bags and bottles of Pepsi. When a series of savage and homicidal acts plague her new neighbourhood, Lou, following in her journalist father’s footsteps, attempts to investigate.

As her final year of high school unfolds, Lou comes perilously close to discovering the truth, and violence erupts, once again unravelling her world. She hops on a Greyhound, destination unknown, propelled by the urgent need to bridge the distance between the life she shared with her father and this precarious new existence where he grows ever more remote to her.

A graduate of UBC’s MFA program in creative writing, Kara Stanley lives, works and plays on the Sunshine Coast with her musician husband, Simon Paradis. Her writing has been published in Fugue, HipMama and Paste and she is a contributing songwriter to the 2013 Stanton Paradis CD Good Road Home and the 2015 Simon Paradis CD Mouthful of Stars. Her non-fiction book Fallen: A Trauma, a Marriage, and the Transformative Power of Music was included on CBC’s Best Books of 2015 list.

"Ghost Warning is very much a coming-of-age-suddenly story, and Stanley expertly moulds the character of Lou with a great deal of perspicacity, admiration, and empathy." — Quill & Quire

"Through her acute, compassion, young narrator, Kara Stanley reconnects us with the raw and the mysterious, deftly cracking open the world with the Swiss Army knife of her prose. A thoroughly engrossing journey, sustained by grief and wonder." — John Gould, author of Kilter: 55 Fictions

"Lou is a young woman forced into adulthood in the wake of loss. Grief becomes the echo, the sound chamber in which Lou rebuilds her life while bidding farewell to her past. With heartbreaking brush strokes, Stanley has delicately painted a portrait of young resiliency, chosen family and the painful process of healing." — Catherine Hernandez, author of Scarborough

"… At its heart, Ghost Warning is a novel that embodies compassion, resiliency, and courage. The story and its unforgettable characters set in a vividly realistic portrayal of Toronto continue to linger long after reading. This is truly a must-read CanLit title!" — Ann Y.K. Choi, author of Kay’s Lucky Coin Variety
or support indie stores by buying on
Copyright © 2020 American Booksellers Association