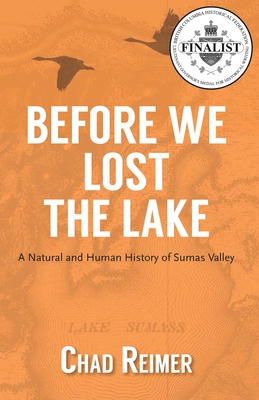 Before We Lost the Lake (Paperback)

A Natural and Human History of Sumas Valley

For thousands of years, the broad expanse between Sumas and Vedder Mountains east of Vancouver lay under water, forming the bed of Sumas Lake. As recently as a century ago, the lake's shores stood four miles across and six miles long. During yearly high water, the lake spilled onto the surrounding prairies; during high flood years, it reached from Chilliwack into Washington State. Then, through the 1920s, a network of dykes, canals, dams and pumphouses was erected and the lake drained—"reclaimed" in the words of projects supporters. A new landscape was created, a seemingly 'natural' prairie carved up into productive farmland.

Today, few people are aware that Sumas Lake ever existed. The only reminder is a plaque erected on the old lakeshore, at a rest-stop along the Trans-Canada Highway just east of Whatcom Road, on the historic trail blazed to BC's gold fields. Yet for millenniums, Sumas Lake was a dynamic, integral part of the region’s natural and human landscape.

In his new book, Before We Lost the Lake, Chad Reimer sets out to truly reclaim Sumas Lake, to restore it to its proper place in the history of the Fraser Valley, BC and the Northwest Coast. Drawing on extensive primary material, Reimer reconstructs the life history of Sumas Lake from the glacial age through the lake’s demise and after. Before We Lost the Lake examines the lake's natural history and ecology, its occupation and use by the Sema:th and other First Nations, its colonization by White immigrants, the environmental changes brought about by introduced plants and animals, and the campaign to drain it. Drainage proponents had their way and gradually the promised benefits were realized. But these benefits came at a heavy cost to the environment and for the Sema:th, whose traditional way of life was irretrievably lost.

Chad Reimer has a BA Honours in History from the University of British Columbia and an MA and PhD in History from York University. He wrote Chilliwack's Chinatowns for the Chinese Canadian Historical Society of BC and Writing British Columbia History with UBC Press. Reimer has also been published in BC History and Pacific Northwest Quarterly. He was born in Winnipeg, Manitoba where he spent his first fourteen winters before moving to the gentler climate of Abbotsford, BC, teaching for some years at the University of Fraser Valley.


Praise For Before We Lost the Lake: A Natural and Human History of Sumas Valley…

“In this well researched and clearly written book, Reimer gives the reader a glimpse of little known B.C. history. It is a tale of colonial incursion and violence, appropriation and exploitation, racism and environmental heedlessness. At a time when there is much talk of reconciliation, it is important to have more information about the crimes of colonialism. We cannot fix what we do not see. Reimer has done us all a favour with this well crafted history.” — Tom Sandborn, The Vancouver Sun

“A compelling cautionary tale of White newcomers’ determination to improve on nature at Indigenous Peoples’ expense.” — Jean Barman, Fellow of the Royal Society of Canada and author of The West Beyond the West: A History of British Columbia

“A terrific read, a nuanced book of careful scholarship, Before We Lost the Lake is sure to find a place on my reference bookshelf. It’s an essential work of Fraser Valley history. Reimer’s Before We Lost the Lake reminds us of the deep cultural and natural history of Sumas Lake far beyond the story we know so well—the engineering feat that drained it and the agricultural life that has been built over the last century on the former lake-bed. His eloquent and pointed work recalls the many meanings of this place over time through the memories of Sem:ath, Nooksack and Sto:lo elders, the field notes of Royal Engineers, the property records and voices of settlers, and modern sources.” — K. Jane Watt, PhD, British Columbia History magazine