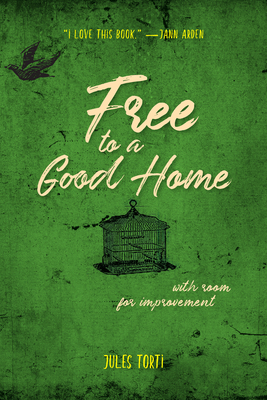 Free to a Good Home (Paperback)

With Room for Improvement

The German word zugunruhe translates as the “stirring before moving.” It’s used to describe birds and herds of animals, like wildebeests, before migration. Though Jules Torti is neither German nor a wildebeest, she understands this marrow-deep anxiousness all too well. Free to a Good Home is evidence of Torti’s life-long commitment to feeling at home where it mattered most: within herself. At eighteen, with one thousand dollars in her bank account, she moved to the West Coast from Ontario to find “her people.” She headed specifically to Davie Street—that’s where all the gays were! Finding a girlfriend proved to be elusive, but she learned a lot of Pet Shop Boys lyrics and studied everything by Jane Rule and Chrystos for guidance. Torti continued searching the world for home. Whether prepping chimpanzees' breakfast in the Congo, scavenging for her own breakfast in the dumpsters of Vancouver, or seeking a permanent address in Ontario’s unforgiving real estate market, Torti found that homesickness took up its own residence in her identity. While she longed for a home of bricks and mortar (or log or stone), she knew her greatest sense of home was to be found in a person, the missing her. At turns poignant, hilarious, and uncannily familiar, Free to a Good Home explores what it means to call a place home when life oddly mirrors a choose-your-own-adventure storybook.

Jules Torti's work has been published in the Vancouver Sun, the Globe and Mail, Mabuhay, Coast Mountain Culture Magazine, Matador Network, Massage Therapy Canada, and Canadian Running. She contributes regularly to Realtor’s blog Living Room and is currently the editor in chief of Harrowsmith magazine. Her first handsome paycheck was for a lesbian erotica story, published in The Mammoth Book of Erotica (Running Press, 2000). She now lives happily ever after with her partner on the forty-fifth parallel north, exactly half way between the equator and the North Pole, in Lion’s Head, Ontario.


Praise For Free to a Good Home: With Room for Improvement…

"Jules took me on a hilarious journey as she searched for her 'formula for happiness.' It’s sort of a Rubyfruit Jungle as told by Pippi Longstocking… No pirates (unless you count exes!), but lots of monkeys!" — Marnie McBean, Order of Canada, three-time Olympic champion

"A walker, a talker and one helluva writer. An avid explorer of this flawed and fabulous world, a fearless and hilarious examiner of the heart’s mysteries, Jules Torti is a brilliant dynamo who reminds us that the optimism of youth and the courage to be true to oneself are shining examples of how to live large, go big and find a forever home and true love. Unless you are a terminally timid wannabe writer with envy issues or a judgey prune with a pickle up your bum, you’ll love this wonderful book!" — Caroline Woodward, author of Singing Away the Dark and Light Years: Memoir of a Modern Lighthouse Keeper

"As a touring musician, I thought I had a flurry of road stories to tell, but Jules must have lived five lives before she was twenty-nine to have experienced all this so far. Her story is one that will resonate with anyone with the taste for travel but a longing for home. Wherever and whomever that may be." — Lisa MacIsaac, Madison Violet

"Jules Torti takes you on a wild spin of a joy ride through her life as she looks for a place to call home." — Laurie Gough, author of Kiss the Sunset Pig, Kite Strings of the Southern Cross and Stolen Child

"A must read for anyone wanting to say Yes! to life. In Free to a Good Home, Jules Torti tells the tall story of her life, her work with chimps at the Jane Goodall Institute and in the Congo, and her pursuit for a perfect home and partner. Her chapters on Africa will resonate with anyone in love with the continent or travel. Torti brilliantly captures the sights, sounds and tastes of Uganda and readers will be moved by the personalities, and sometimes heartbreaking pasts, of these unforgettable chimps." — Teresa O’Kane, author of Safari Jema: A Journey of Love and Adventure from Casablanca to Cape Town

"[Torti] has a keen ability to weave stories together using self-deprecating humour, touching reflections, and colourful descriptions. Her transient nature and curiosity for places unknown is best captured in the title, but her constant self-awareness and strive for self-improvement is the space between each wave that rolls off the page. In short, she has a strong command of storytelling." — Rrampt