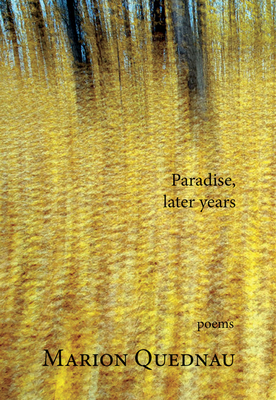 Marion Quednau’s collection Paradise, Later Years plays with the language of juxtaposition, nothing is straight on; if there’s quiet beauty by the sea, there’s a passing warship. Quednau’s lyricism, whether of river or lover, bears witness to relationships transformed by the tension—and surprise—of setting one thing against another. The verse is often irreverent, the humour touching on the pain of recognition, making us shift our boundaries. This book is a brave road trip where no one comes out with the same skin of escape, or want, but rather with new forms of redemption.

"This is a highly-anticipated collection by one of the most compelling writers I’ve encountered. In long poems, prose poems and piercing lyrics, Marion Quednau spotlights the strangeness of the so-called matter of fact, of 'all the unknown edges of knowing' 'in our wanders for life’s hardpan meaning.' Here we encounter poems of linguistic richness, of pathos and wit, poems about love and failed relationships, a 'cliffhanger' family, the untameable natural world. These are poems 'for / the sake of outrageous beauty' in which 'the intricacies matter.' Quednau’s is a book you can read 'as if time were long again' and you are grateful for it." — Susan Elmslie, author of Museum of Kindness

Marion Quednau has won numerous awards for poetry, including a National Magazine Award, a chapbook award from the League of Canadian Poets, a Malahat Long Poem prize, and has won the People's Choice when short-listed for CBC Writes Poetry. Her prose has also received critical acclaim, including the Smithbooks-Books in Canada First Novel Award, and kudos from the Children's Book Centre and Ontario Library Association. Paradise, Later Years is her fourth book of poetry.