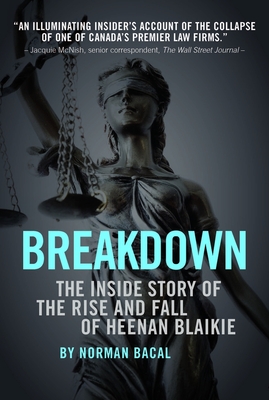 The Inside Story of the Rise and Fall of Heenan Blaikie

Heenan Blaikie was one of Canada's leading law firms that boasted 1,100 employees and once had two former prime ministers on its staff -- Pierre Trudeau and Jean Chrétien. When it collapsed in February 2014, lawyers across Canada and the business community were stunned. What went wrong? Why did so many lawyers run for the exit? How did it implode? What is it that holds professional partnerships together?

This is the story of the rise and fall of a great company by the ultimate insider, Norman Bacal, who served as managing partner until a year before the firm's demise. Breakdown takes readers into the boardroom offices during the heady growth of a legal empire built from the ground up over 40 years. We see how after a change of leadership tensions erupted between the Toronto and Montreal offices, and between the hard-driving lawyers themselves. It is a story about the extraordinary fragility of the legal partnership, but it's also a classic business story, a cautionary tale of the perils of ignoring a firm's culture and vision.


Praise For Breakdown: The Inside Story of the Rise and Fall of Heenan Blaikie…

"An illuminating insider's account of the collapse of one of Canada's premier law firms. Puts you in the passenger seat of a train wreck." — Jacquie McNish, Senior Correspondent, The Wall Street Journal

"A fascinating and important business story, whose lessons on the impact of culture and leadership apply to all organizations, regardless of size, sector or geography." — Calin Rovinescu, President and CEO, Air Canada

Norm Bacal founded the Toronto office of Heenan Blaikie in 1989, and within the next 25 years grew it to an office of over 200 lawyers. In 1997 he became the national co-managing partner of the firm and helped it become one of Canada’s best-known law firms. As one of Canada’s leading tax attorneys in the entertainment business, he helped to finance countless Canadian films and television shows and many Hollywood studio pictures filmed in Canada. He also advised studios such as Warner Bros and MGM and was a member of the board of directors of Lions Gate Entertainment for almost 10 years. At the end of 2012, Bacal retired as managing partner. Born in 1956 in Montreal, Bacal graduated from McGill University’s Faculty of Law in 1980. He lives in Toronto with his wife, Sharon, a portrait artist. They have four children.