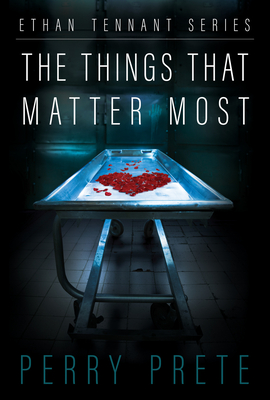 The Things That Matter Most (Ethan Tennant Series #3)

In the summer of 2000, Ethan Tennant, Tom Lister and Galen Hoese work together to catch the killer of young girls during the first summer of the new millennium.
Young, innocent girls play in the summer heat, oblivious to the dangers around them, only to fall prey to the worst type of death possible. Parents, neighbours and the police are frustrated by the lack of progress on the case. The killer is always one step ahead of the police, and seems to know more than the police investigating the crimes. It’s not until Ethan and his new girlfriend become involved that the pieces of the puzzle begin to form a complete picture. But does anyone really want to see what had remained hidden for so long?

Perry Prete is a native of Sudbury, Ontario, but grew up in London, Ontario. After graduating as a paramedic in 1983 from the Ambulance and Emergency Care Program at Fanshawe College, Perry worked part—time for various EMS agencies before settling in Brockville, Ontario. He continues to work as a full—time paramedic and is also the owner of Sands Canada Inc.. Using the vast amount of knowledge that he has gained over his thirty years working as a paramedic, Perry crafts gripping and suspenseful novels full of realistic details.