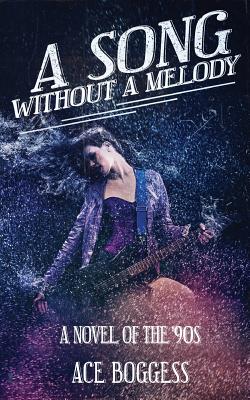 A Song Without a Melody (Paperback)

A novel of the '90s by Ace Boggess

Collin Hearst is a timid young reporter covering the Pittsburgh music scene during the early 1990s. Largely inept at dealing with other people, he hides behind characters he refers to as his "routines." December Leigh, lead singer of the alternative-rock band Cancer Moon, also has identity issues, hiding behind more literal masks. When they get together, what follows is a whirlwind tour of sex, drugs, and self-discovery, all set against a backdrop of colorful '90s subculture and a soundtrack that Collin will hear forever in his mind.

"Harrowing and authentic... Boggess writes like a demented coroner cutting into living bodies."

"This novel would be just as potent and vivid on film--or as a stage play or a graphic novel. Song is both philosophy and thrilling suspense--grunge-era lyrics scrawled across the pages of Camus."

"A Song Without a Melody is Ace Boggess at his best: lurid prose, a strong sense of place, and the heart and forward momentum that makes him a master storyteller."

Ace Boggess is a freelance writer and editor living in Charleston, West Virginia. He is the author of two books of poetry: The Prisoners (Brick Road Poetry Press, 2014) and The Beautiful Girl Whose Wish Was Not Fulfilled (Highwire Press, 2003). His writing has appeared in Harvard Review, Notre Dame Review, Lumina, Mid-American Review, River Styx, North Dakota Quarterly, and hundreds of other journals. He received a fellowship from the West Virginia Commission on the Arts and spent five years in a West Virginia prison. But that's another story.