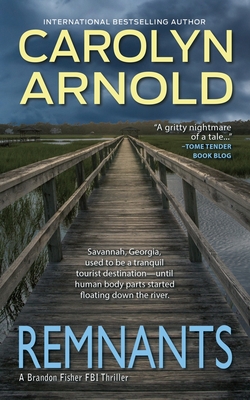 He wrenches at the chains on his wrists and ankles-to no avail. Tears stream down his cheeks as his captor comes at him all dressed in black, chanting and mumbling incoherently, a large knife in his hands...

When multiple body parts are recovered from the Little Ogeechee River in Savannah, Georgia, local law enforcement calls in the FBI. Special Agent Brandon Fisher and his team with the Behavioral Analysis Unit set out to investigate, but with the remains pointing to three separate victims, this isn't going to be an open-and-shut case.

With no quick means of identifying the deceased, building a profile of this serial killer is more challenging than usual. Why are these victims being selected? Where are they are targeted? Why are their limbs being severed and their bodies mutilated?

The questions compound as the body count continues to rise, and when a torso painted blue and missing its heart is found, the case takes an even darker turn. The FBI will need to convince the Deep South to give up her secrets if they're going to catch the killer. After all, one thing is clear: the killing isn't going to stop until they figure it all out. And they are running out of time...

Remnants is "a gritty nightmare of a tale that will churn the stomachs of even the most hard-boiled of FBI agents..." (Tome Tender Book Blog). Buy this heart-pounding thriller today and hunt a serial killer alongside the FBI Perfect for fans of Catherine Coulter, JT Ellison, and Patricia Cornwell.

"This book is gritty, sometimes almost gross, with plot twists that will keep you guessing for hours." ⭐⭐⭐⭐⭐

"This book was fast paced from page one. It had me sucked in, and I hated putting it down." ⭐⭐⭐⭐⭐

"All the details in this story are amazingly accurate." ⭐⭐⭐⭐⭐

"Arnold makes the reader feel like part of the team."⭐⭐⭐⭐⭐