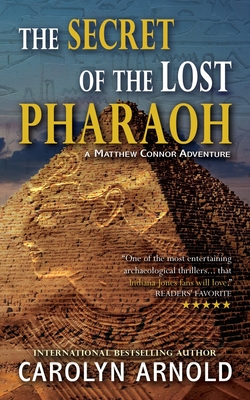 The Secret of the Lost Pharaoh (Matthew Connor Adventure #2)

In Egypt's Western Desert lies the tomb of an unnamed pharaoh that hides a secret so powerful, it could destroy the world as we know it. Archaeologist and adventurer Matthew Connor has made a career of finding legends the world has all but forgotten. Though there's one in particular that has fascinated him for years-the Emerald Tablets. Myth says that they possess the knowledge of the universe, allowing humankind to traverse Heaven and Earth, and have the power to bestow wealth and wisdom upon whoever possesses them. But if they fall into evil hands, it could cause a global disaster. So when a former colleague stumbles across an ancient Egyptian hieroglyphic map that promises to lead to a pharaoh's tomb and the Emerald Tablets, there's no way he's turning down her invitation to join the dig. He only has one stipulation: his best friends Robyn Garcia and Cal Myers come with him. The road ahead isn't going to be an easy one, and their shared dream of recovering the Emerald Tablets is being crushed at every turn. And just when they think it's all over, they learn there are a few clues they have overlooked. But they're no longer the only ones searching for the Tablets. Now, the fate of the world hangs in the balance, and soon they'll find out that when it comes to hunting legends, they can't trust anyone. The Secret of the Lost Pharaoh is a fast-paced action adventure that's akin to an Indiana Jones story set in modern times. It's light on history and heavy on action, suspense, and intrigue. Buy this international bestselling book today and strap yourself in for an action-packed good time ⭐⭐⭐⭐⭐Bronze Award Winner in Adventure, 2018 Readers' Favorite Award Contest⭐⭐⭐⭐⭐ " The Secret of the Lost Pharaoh] is one of the most entertaining archaeological thrillers I've had the pleasure of reading. It's] a polished, well-written, stand-alone novel that Indiana Jones fans will love." -Readers' Favorite ⭐⭐⭐⭐⭐ What readers say about The Secret of the Lost Pharaoh ⭐⭐⭐⭐⭐ "This book is INTENSE "
⭐⭐⭐⭐⭐ "Adventure, action and suspense comes with every page of the book."
⭐⭐⭐⭐⭐ "There was so much intrigue and twists and turns that I didn't want to put the book down."
⭐⭐⭐⭐⭐ "Arnold does a wonderful job of weaving incredible tales of history and suspense."
⭐⭐⭐⭐⭐ "The story line is] brilliant descriptive writing brings the ancient world of Egypt to life."
⭐⭐⭐⭐⭐ "An action-packed, edge-of-your-seat, treasure-hunting mystery."
⭐⭐⭐⭐⭐ "Arnold makes you feel the heat of the desert sun as well as the chill of an underground tomb."
⭐⭐⭐⭐⭐ "This book has it all... action, adventure, Egyptian mysteries, romance, betrayal, death and treasure hunting "
⭐⭐⭐⭐⭐ "It's an easy 5/5 from me, definitely even higher if my scale went that high."
⭐⭐⭐⭐⭐ "A gripping story full of twists and turns.