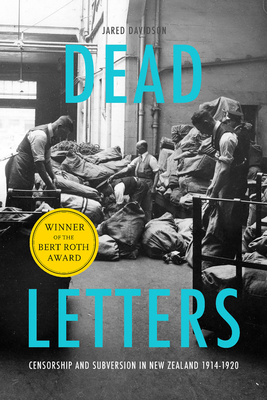 Censorship and subversion in New Zealand 1914–1920

In 1918, a miner on the run from the military wrote a letter to his sweetheart. Two months later he was in jail. Like millions of others, his letter had been steamed open by a team of censors shrouded in secrecy. Using their confiscated mail as a starting point, Dead Letters reveals the remarkable stories of people caught in the web of wartime surveillance. Among them were a feisty German-born socialist, an affectionate Irish nationalist, a love-struck miner, an aspiring Maxim Gorky, and two mystical dairy farmers with a poetic bent. Military censorship within New Zealand meant that their letters were stopped, confiscated, and filed away, sealed and unread for over 100 years. Until now.

Jared Davidson is an award-winning writer based in Wellington, New Zealand. He is the author of Remains to Be Seen and Sewing Freedom, a curator of the exhibition He Tohu, and an active committee member of the Labour History Project.
Loading...
or
Not Currently Available for Direct Purchase