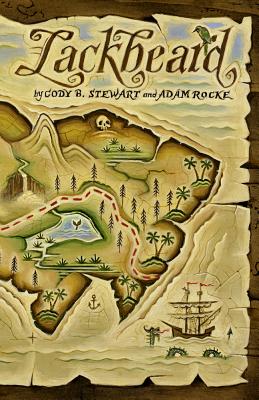 Bartholomew "Black Bart" Roberts. Calico Jack. Henry Morgan. You think those are the fearsomest pirates ever to sail the seven seas? That's because you haven't yet had the great misfortune to stumble upon Captain Lackbeard and his crew of mismatched misfits. if the Captain is yet challenged in the fine art of facial hair development? And who cares that he's only eleven years old? Adventure, chums. That's what our hero is after. Or at least that's what he thinks he's after... until real adventure finds him.

Cody B. Stewart was born in the Adirondacks, in Upstate New York. His love of stories began in those mountains as he vanquished trolls, fought in the American Revolution and discovered his latent mutant powers. Stories have continued to consume his life, but he now plucks them out of his head and puts them down on paper in the form of novels and comic books. He left the Adirondacks to grow into a man, did so, and has since returned with a wonderfully supportive wife and two sons. Adam Rocke Slutsky never met an adventure he didn't love. From swimming with great white sharks without a cage, to jumping out of a plane without a parachute, Adam's adrenaline junkie tendencies play a major role in his writing.Throw in a secondary degree in CryptoZoology, and it's anyone's guess where Adam's literary travels will take him.
Loading...
or
Not Currently Available for Direct Purchase