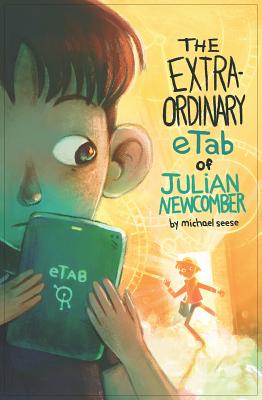 The Extraordinary Etab of Julian Newcomber

Always the new kidTwelve-year-old Julian Newcomber knows he has a fitting--what the smart folks call apropos--last name. His family moves constantly due to his Dad's quirky inventions, which have a habit of misbehaving and blowing up the family home. So he's always been the new kid in school.Because of his father's inventions Now firmly settled in a peaceful and close-knit community, Julian believes he's finally found a home, not to mention a safe haven from his father's calamities. That is, until a vaguely familiar 20-year-old man walks out of the bedroom closet, and identifies himself as future Julian.Until his father goes too far It turns out that his father's latest contraption, the eTab, alters time. So Grown-Up Julian decided to take a joyride into the past and dropped his cell phone on a Civil War battlefield. (Who wouldn't want to see Pickett's Charge, after all?)And his future self needs his help With his own eTab too low on juice to take him all the way back to his own time, Grown-Up Julian needs Young Julian to locate a quantity of Cucumium so he can go back to the Civil War and retrieve his cell phone, then get home before his parents find out. Before history is rewrittenThe two Julians break rules, break curfews, and break into the Intermediate School in an effort to locate some Cucumium (though they're not exactly sure what it is), so they won't be forced to share the room and fight over the top bunk forever. Oh, and if Grown-Up Julian stays, it could, as a side effect, pollute the natural timeline and rewrite history as they know it. No pressure.

Michael Seese is a former journalist, but his current day job is in information security for a bank. Or, as his son could say even at age three, Daddy keeps people's money safe. He has published three books: Haunting Valley, a collection of fictional ghost stories centred around his hometown; Scrappy Business Contingency Planning, which teaches corporate BCP professionals how to prepare for bad things; and Scrappy Information Security, which teaches us all how to keep the cyber-criminals away. Other than that, he spends his spare time rasslin' with three young'uns. Visit www.MichaelSeese.com or follow @MSeeseTweets to laugh with him or at him.
Loading...
or
Not Currently Available for Direct Purchase