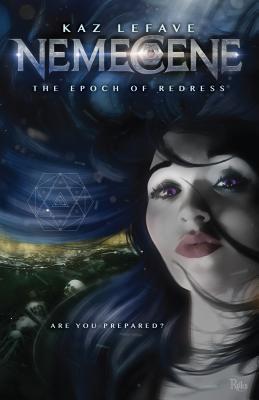 The Epoch of Redress

In a toxic future flooded by dead oceans and poisonous gases, twins Keeto and Elize become the target of an otherworldly predator in their quest to save Elize from their mother's fate. The mystery surrounding their mother does more than evoke painful memories. It has been plaguing Elize's nightmares for 9 years as she shows increasing evidence of the psychological sickness for which their mother was confined, and apparently died from. Keeto, an armchair archeologist and risk-averse bookworm, fears that their oppressive and deceitful father will find out, and have the daring quick-witted Elize committed, as well. With the help of an underground merchant community, the twins, now 18, escape from their secluded highland village to Eadonberg, the infamously stunning floating coastal city protected inside an invisible biowall. Elize befriends Zafarian, a dweeby classmate with expertise in gadgetry and law-breaking, and with the most unusual hair. Keeto does not approve. A shadow of distrust follows the boys as the trio become increasingly entangled in a conspiracy and a mysterious stranger taunting them with clues. However, what lurks below the waters parallels the darkness the twins discover as they settle into their new identities: Elize, a medical student at Schrodinger University, and Keeto, an apprentice curator at the Museum of Antiquities. As tough-girl Elize's stability deteriorates, she comes to terms with her fragility. With so many people, looking for the twins, some knowing their importance, others guessing at it, still others fooled by layers of deception, and the twins having no awareness of any of it, loyalties get tested. Not even the Unification, can protect them. In fact, its own secret drive to locate the twins summons still others to the hunt -- others whose true intentions remain hidden. Will Keeto and Elize find the answers in time? Or will the questioning lead them down a dangerous path where treachery, lies, and deceit reside? Enter the Nemecene(TM) World, where the real answers are waiting for you to discover them...before they discover you. Be prepared.

Kaz Lefave is a Toronto-based science fiction world builder who uses her multi-disciplinary design experience and overflowing imagination to craft compelling stories by connecting the dots between science, art, music, dance, fashion, words, spirit, nature, reason, humanity, darkness, humor, and a curious taste for the inexplicable. Kaz has a bachelor in Applied Science (engineering) from Queen's University, a fashion degree from the Richard Robinson Fashion Design Academy, certifications in personal training and hypnosis, a US Patent in user interface design, an IMBD credit as director of "White," facilitates for the Proctor Gallagher Institute Matrixx program, and has written extensively on environmental issues via WomanNotWaiting.com, LifeAsAHuman.com, and her philanthropy mission at Aguacene. She speaks English, French, Spanish, and has dabbled in German, Arabic, and Russian. Kaz also strives to be a recovering chocoholic, with limited success, and to look more and more like her standard poodle every day.
Loading...
or
Not Currently Available for Direct Purchase