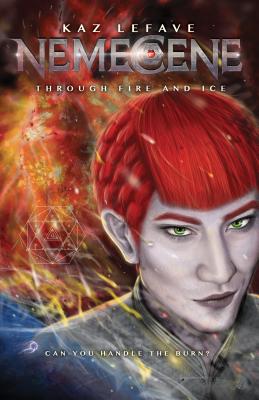 Through Fire and Ice

While Earth gets hotter day by day, Elize's deteriorating mental stability awakens forces that even the Ministry, the seat of world power, cannot control. In this final installment of the first trilogy in the 10 episode Nemecene(TM) series, the hunt for twins Keeto and Elize continues, and a race to save Elize from her own self-destructive behavior emerges. With the help of their mother's ex-medic, Dr. Tenille, and his secret connection with the new director of the Unification Research Arm, Elize gains access to classified experiments that could hold the answers to her psychosis. Coupled with their half-Gadlin friend Zafarian's ingenious hacks into high council data packets, the snooping trio discover that the twins' absent father had been hiding more than his true profession from them. But he is not the only one with questionable origins. Groups of mysterious beings are appearing, and certain children are at risk, once again. What transpires inside the illusory safety of their young community is unspeakable, as is their fate. If the twins only knew what really happens at the Almedina orphanage, and who is ultimately responsible ... Sothese, the master of subterfuge and deception, rises to the challenge of otherworldly first narrator. Through the visceral style that remains the trademark of his kind, he teases the mind and body with artful prose and misdirection. You may not feel for him, but you will definitely feel him. As both the Pramam's personal advisor and governor of the Global Spiritual Unit, Sothese's reach extends beyond political maneuvering. Obsessions, submissions, and transgressions coil around those who should know better than to entwine themselves with him, yet the temptations can be irresistible ... to anyone. Debunked government propaganda ignites a movement calling for transparency that risks exposing the twins' location. While the Pramam's leadership decays from within, allies emerge, but are they already too late to stop the gathering? Chaos replaces order with Keeto and Elize as bait. Only a shift in perception can restore the balance in the Unification, on the planet, and inside Elize's splintered mind.Would you question your beliefs?

Kaz Lefave is a Toronto-based science fiction world builder who crafts compelling stories by connecting the dots between science, art, music, dance, fashion, words, spirit, nature, reason, humanity, darkness, humor, and the inexplicable. She has a B.Sc. in engineering, a fashion degree, certifications in personal training and hypnosis, a US Patent, an IMBD director credit, a water/ocean philanthropy mission, and speaks English, French, Spanish, some Russian, German, and Arabic. Kaz also strives to be a recovering chocoholic, with limited success, and actually does look more and more like her standard poodle every day.
or
Not Currently Available for Direct Purchase
Copyright © 2020 American Booksellers Association