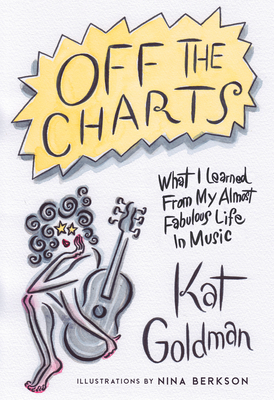 What I Learned from My Almost Fabulous Life in Music

"Kat is a storyteller extraordinaire...Read this book with glee. It's a revelation." -CHARLES PACHTER

So you want to make it as a singer-songwriter? Kat Goldman has been there, almost to the very top, and now she's back with sage advice and hilarious behind-the-scenes stories from a lifetime of toil in the dive bars and legendary venues of the contemporary music scene.

Learn what it's like to meet your first fan, date a rock star (never again ), perform in a grocery store, and rebuild your career after getting hit by a car in a bagel shop. Feel the sting of rejection and rampant sexism, and the thrill of writing a hit song and performing with your idols...

Off the Charts is a whimsical, uproarious tour through a fickle business that never seems to repay what performers put into it, and one woman's highly intimate account of how she made the best of almost making it. Featuring a sparkling set of original illustrations by the award-winning Nina Berkson.

Kat Goldman =========== KAT GOLDMAN is one of Canada's most celebrated songwriters. She has made four critically acclaimed albums and her songs have been covered by Grammy-nominated band, The Duhks, and American folk hero Dar Williams, among many others. She lives in Toronto. This is her first book.
Loading...
or support indie stores by buying on