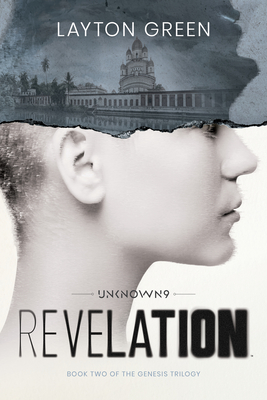 The mystery, intrigue, and globetrotting suspense continue in this second installment of the Unknown 9: Genesis trilogy.

After escaping from a watery dungeon in Venice, astrophysics PhD candidate Andromeda “Andie” Robertson and investigative reporter Cal Miller are whisked to Bologna by a member of the mysterious Leap Year Society. A deadly confrontation with the Society’s bitter rivals, the Ascendants, sends Andie and Cal on the run once again, desperate to solve the Star Phone puzzle so they can reclaim their lives and rescue their loved ones.

Brilliantly juxtaposing a modern-day thriller with a historical search for a missing physicist, REVELATION probes ever deeper into the mounting mysteries surrounding Andie and her past.

What is the source of her strange hallucinations?

What are the true origins of the Leap Year Society and the Ascendants?

How are her mother and her mentor, Dr. James Corwin, involved?

From Italy to India and New York to Buenos Aires, Andie and Cal risk their lives to probe a secret world hidden in plain sight, drawing closer to answers that will determine not only their own fates, but who controls a new frontier of knowledge.

From the author of the bestselling Dominic Grey novels, Genesis is a mind-bending thriller about how far two people will go for answers, and to save the ones they love.

LAYTON GREEN is a bestselling author who writes across multiple genres, including thriller, mystery, suspense, and fantasy. His novels have been nominated for multiple awards (including a two-time finalist for an International Thriller Writers award), optioned for film, translated into foreign languages, and have reached #1 on numerous genre lists in the United States, the United Kingdom, and Germany. In addition to writing, Layton attended law school in New Orleans and was a practicing attorney for the better part of a decade. He has also been an intern for the United Nations, an ESL teacher in Central America, a bartender in London, a seller of cheap knives on the streets of Brixton, a door to door phone book deliverer in Florida, and the list goes downhill from there. Layton lives with his family in North Carolina. You can also visit him on Facebook, Goodreads, or on his website (laytongreen.com).
Loading...
or support indie stores by buying on