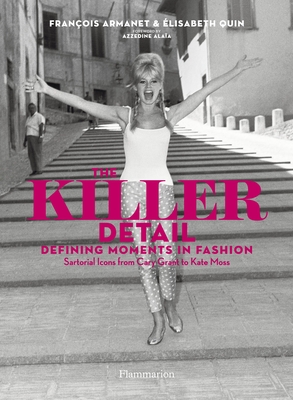 Striking photographs of 120 influential figures of the twentieth century highlight a singular sartorial detail that the stars wore first and that, as a result, redefined fashion. In a series of iconic portraits accompanied by insightful and sometimes dishy text, this volume examines the most influential stars of the twentieth century and the "killer detail" that made them stand out and for which they would forever be remembered. If what Stendhal called "the charming little flaw" is what inflames desire, then the killer detail is the harbinger of true elegance. It is a particular feature that catches the eye, encapsulates an attitude, or refines a style, distinguishing the wearer from the crowd. The Killer Detail is a veritable fashion show featuring writers, artists, performers, and models who all left their mark on the twentieth century as bellwethers of style: from Marlene Dietrich’s pantsuit to Kate Moss’s skinny jeans; from Liz Taylor’s leopard-print swimsuit to Jimi Hendrix’s military jacket; and from Thelonious Monk’s beret to Frank Sinatra’s fedora. These are the individuals who dared to invent new perspectives in fashion and adopt fresh trends that would be reinvented by others continually for years to come.

Praise For The Killer Detail: Defining Moments in Fashion…

"François Armanet and Élisabeth Quin, two of the best-known (and best-dressed) journalists in France, have turned this concept into a photographic and psychological study of the allure of 126 male and female writers, artists, performers and fashion figures of the 20th century." ~New York Times

“This book offers a different raw insight into the eyes of fashion icons from decade to decade. If you’re a fan of fashion and the history of the world’s most famous style icons from every generation, this is a must read.” ~Zink Magazine

"This 264-paged tome has found a comfy home on our coffee table and has wooed every curious reader who's ever wanted to take a trip back in time." ~HotterInHollywood.com

Elisabeth Quin is a film critic who has appeared on numerous cultural programs in France. She has published three novels and a book on the representation of death in art. François Armanet was previously editor in chief of the French newspaper Libération and now runs the magazine Nouvel Observateur. He has produced several cultural and travel programs and he directed and cowrote a film based on one of his three novels.
Loading...
or
Not Currently Available for Direct Purchase