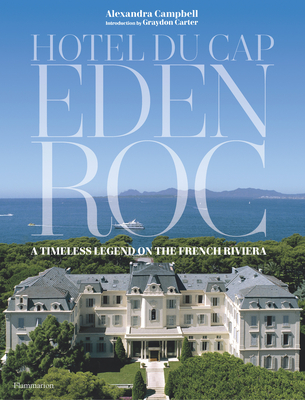 A Timeless Legend on the French Riveria

Nestled in a spectacular botanical garden with stunning views on the Mediterranean, the idyllic Hotel du Cap-Eden-Roc has attracted scintillating international guests for 150 years.

Created in the nineteenth century as a retreat for artists and writers, Hôtel du Cap-Eden-Roc at Cap d'Antibes continues to captivate an international clientele as an exclusive retreat today. The tropical paradise attracted Lost Generation writers such as Ernest Hemingway and F. Scott Fitzgerald, whose Tender is the Night was set at Eden Roc. Artists--including Monet, Matisse, Chagall, Picasso, and Damien Hirst--have drawn inspiration from the enchanted setting and its lush botanical gardens. Master photographers Jacques Henri Lartigue and Slim Aarons famously captured guests splashing in the Mediterranean or lounging in the sun next to the iconic seawater swimming pool carved in the basalt cliff.
The secluded resort, located between Nice and Cannes, has always been a favorite haven on the French Riviera for A-list celebrities--from Marlene Dietrich to Orson Welles, and from John Lennon and Yoko Ono to Sharon Stone--during the Cannes film festival, and for secluded family holidays, ideal for unwinding at the green and white seaside cabanas where time stands still, sampling the bar's iconic Bellinis, or enjoying creative locally-sourced cuisine. The hotel's storied history is full of romance, humor, mystery, and legend.
Built on one of the most alluring sites on the Rivera, the Hôtel du Cap-Eden-Roc is the epitome of beauty, timeless elegance, and discretion; it has been a home away from home for generations of artists, photographers, authors, politicians, and Hollywood stars.

Praise For Hotel du Cap-Eden-Roc: A Timeless Legend on the French Riveria…

"The hotel will commemorate its milestone birthday this spring with a coffee-table book, Hotel du Cap-Eden-Roc: A Legend on the French Riviera, to be published by Flammarion in May in the U.S. The book features 300 pages of historical anecdotes and iconic images, from Jacques Henri Lartigue’s moody shots at the opening of the Eden-Roc restaurant in 1920 to Slim Aarons’s famous pool scenes and portraits of John Lennon and Yoko Ono posing near the rocks in 1970." —WSJ.  MAGAZINE

Historian Alexandra Campbell has written extensively on the early twentieth century, contributed to Villa Astor, and coauthored Esmond: The Lost Idol. Graydon Carter is is coeditor of Air Mail and former editor-in-chief of Vanity Fair (1992-2017).
Loading...
or support indie stores by buying on