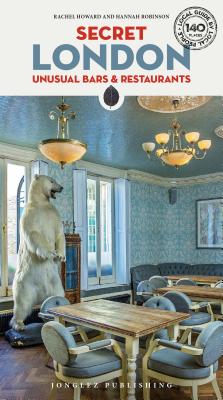 Eating and Drinking Off the Beaten Track (Secret Guides)

Have lunch with the inmates of a high security prison, stroll through a sex shop into a Mexican restaurant, sing your heart out in a clandestine Korean karaoke club, tap your toes in a gypsy swing club, get pickled in a marooned Irish pub, join the sixties club that's still swinging, drink cappuccinos made by murderous bikers, play petanque in a central London cellar, tap an oak-tree trunk for whisky ... Discover over 140 places with eye-popping decor, eccentric owners, and unusual menus. This guide to London's most peculiar and under-the-radar bars and restaurants is for serious foodies, intrepid drinkers, urban explorers -- and anyone curious to discover the infinite possibilities to have fun in London. "The perfect gift for that friend who thinks Caf Rouge is a bit exotic." (The Londonist)"I put the guide to the test around Covent Garden and Soho -- two of the most touristy parts of the capital -- and uncovered a host of gems I'd never encountered before, despite living there for seven years." (Rob McFarland, Australian Traveller)

Rachel Howard is a journalist and author who has lived in almost every borough in London. A regular contributor to Conde Nast Traveller, The Guardian, and The Telegraph, Rachel writes mainly about travel, food, and the arts. As well as Secret London, An Unusual Guide (also published by Jonglez Publishing), she is the co-author of Mykonos Muse, an insiders' guide to the wildest Greek island, published by Assouline. Hannah Robinson is a Scottish-born screenwriter, director and author who splits her time between London and Edinburgh. She has made a raft of prize-winning short films and animations, holds two Hollywood feature screenwriting awards and is a script consultant for Sir Lenny Henry. She has worked as a food journalist for The Scotsman and The List magazine, and is the author of Secret Edinburgh, an Unusual Guide for Jonglez - the best-selling guidebook to the city. Hannah is the creative force behind the cultural tourism web project, "The Story of Edinburgh in 101 Objects". She has recently set up Palindromicals, a creative production company, and is currently making a podcast series about laughter.
or
Buy Here
Copyright © 2020 American Booksellers Association