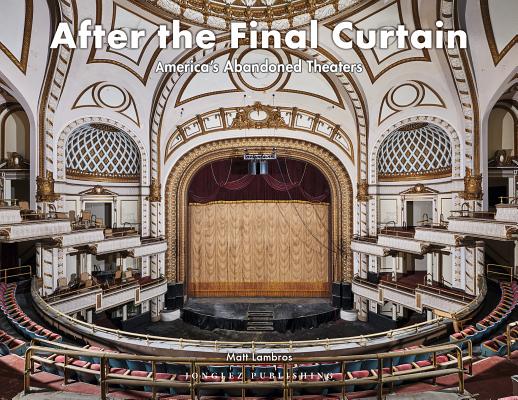 After the Final Curtain

In the early 20th century the streets of small towns and cities across America were filled with the lights and sounds of movie theaters. The most opulent -- known as "movie palaces" -- were designed to make their patrons feel like royalty; people would dress up to visit. But as time went on it became harder and harder to fill the 2,000+ seat theaters and many were forced to close. Today, these palaces are illuminated only by the flicker of dying lights. The sound of water dripping from holes in the ceiling echoes through the auditoriums. In After the Final Curtain (Volume 2) internationally-renowned photographer Matt Lambros continues his travels across the United States, documenting these once elegant buildings. From the supposedly haunted Pacific Warner Theatre in Los Angeles to the Orpheum Theatre in New Bedford, MA -- which opened the same day the Titanic sank -- Lambros pulls back the curtain to reveal what is left, giving these palaces a chance to shine again.

Matt Lambros is an architectural photographer who began photographing abandoned buildings over ten years ago. A graduate of Boston University's digital imaging and photojournalism programmes, Lambros has since been documenting the decay of America's abandoned theatres in the hope of shedding light on these forgotten buildings and the efforts to repurpose them. Part of raising awareness of these treasures is his involvement with various organisations that work to restore and reopen abandoned theatres in the United States. Lambros has donated time and photographs to support such organisations as the Friends of the Historic Variety Theatre, which in 2009 acquired the historic Variety Theatre, derelict since the late 1980s. Recently, Lambros' photography of the restoration of the Kings Theatre in Brooklyn has been featured in several publications, including New York Magazine, The Guardian and The New York Times. His work with Proctor's Palace Theatre, Loew's Majestic Theatre and the Paramount Theatre (among others) has been featured in art galleries around the world. Examples of Mr. Lambros' work can be viewed online at www.afterthefinalcurtain.net and www.mlambrosphotography.com.
Loading...
or
Not Currently Available for Direct Purchase