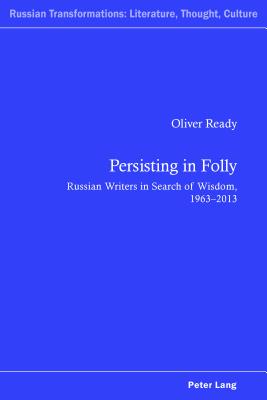 The theme of foolishness has long occupied an unusually prominent place in Russian culture, touching on key questions of national, spiritual, and intellectual identity. In literature, the figure of the fool - and the voice of the fool - has carried additional appeal as an enduring source of comic and stylistic innovation. Never has this appeal been stronger than in the past half-century, whether as a reaction to the scientific atheism and official culture of the late-socialist era, or as a response to the intellectual and moral disorientation that accompanied the collapse of the Soviet Union.

Persisting in Folly traces three contrasting phases within this period: the praise of folly that underpins acknowledged samizdat masterpieces by Venedikt Erofeev, Yuz Aleshkovsky, and Sasha Sokolov; the sceptical appraisals of the Russian cult of the fool offered in the 1980s by Viktor Erofeev and Dmitry Galkovsky; and the legacy of this conflicted tradition in post-Soviet prose. By combining close readings with a rich comparative and contextual framework, this book charts a new path through recent Russian literature and offers a wide-ranging consideration of the causes and consequences of Russian writers' enduring quest for wisdom through folly.

Oliver Ready teaches Russian language and literature at the University of Oxford and is a research fellow at St Antony's College. While living in Saransk and Moscow in the 1990s, he developed a strong interest in new Russian writing. He has translated books by the contemporary Russian authors Yuri Buida and Vladimir Sharov, and is general editor of the anthology The Ties of Blood: Russian Literature from the 21st Century (2008). His translation of Dostoevsky's Crime and Punishment was published in Penguin Classics in 2014. Since 2008, he has been consultant editor for Russia and East-Central Europe at the Times Literary Supplement.
or
Not Currently Available for Direct Purchase