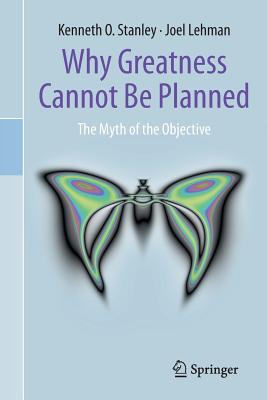 Why Greatness Cannot Be Planned

The Myth of the Objective

Why does modern life revolve around objectives? From how science is funded, to improving how children are educated -- and nearly everything in-between -- our society has become obsessed with a seductive illusion: that greatness results from doggedly measuring improvement in the relentless pursuit of an ambitious goal. In Why Greatness Cannot Be Planned, Stanley and Lehman begin with a surprising scientific discovery in artificial intelligence that leads ultimately to the conclusion that the objective obsession has gone too far. They make the case that great achievement can't be bottled up into mechanical metrics; that innovation is not driven by narrowly focused heroic effort; and that we would be wiser (and the outcomes better) if instead we whole-heartedly embraced serendipitous discovery and playful creativity.

Controversial at its heart, yet refreshingly provocative, this book challenges readers to consider life without a destination and discovery without a compass.

Kenneth O. Stanley and coauthor Joel Lehman are both experienced artificial intelligence researchers whose scientific discoveries led to the insights in "Why Greatness Cannot Be Planned." Stanley, an associate professor at the University of Central Florida, has published over 80 peer-reviewed articles (10 of which have won best paper awards) and is regularly invited to speak at venues across the world. Lehman is currently a post-doctoral fellow at the University of Texas at Austin. In August 2015 he begins as an assistant professor at the IT University of Copenhagen.
Loading...
or support indie stores by buying on