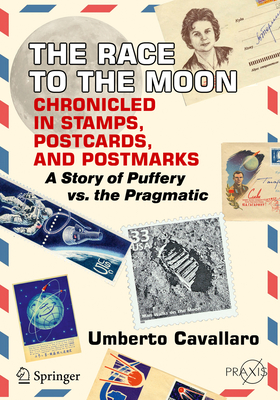 The Race to the Moon Chronicled in Stamps, Postcards, and Postmarks

A Story of Puffery vs. the Pragmatic

The story of the famed race to the Moon between the US and the USSR has been told countless times. The strategies of these two superpowers have often been paralleled in a way that highlights their fight for dominance and efforts to develop needed new technologies. This book will show how beneath these surface similarities, the two competing nations employed very different core tactics. It provides a new perspective of the history of the space race by analyzing that history through philately - that is, from the images on postage stamps, post cards, and letters in circulation at that time. Through this fascinating historical visual record, the author shows how the propaganda-heavy approach of the USSR eventually lost out to the more pragmatic approach of the United States.

Umberto Cavallaro is founder and current president of AS.IT.AF (Italian Astrophilately Society), as well as the editor of its quarterly journal, AD*ASTRA. His professional activity led him to cooperate for many years with ESA, the European Space Agency. Author of "Propaganda e Pragmatismo in gara per la conquista della Luna" ("Propaganda & Pragmatism in race to the Moon" Impremix, Torino 2011) and "Donne nello Spazio" ("Women inSpace", Mursia, Milano 2015), he has translated into Italian several publications, including "The All-American Boys" by Walter Cunningham, an Apollo VII astronaut.
Loading...
or support indie stores by buying on