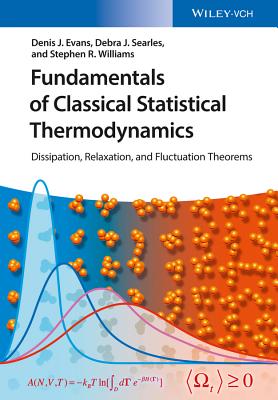 Both a comprehensive overview and a treatment at the appropriate level of detail, this textbook explains thermodynamics and generalizes the subject so it can be applied to small nano- or biosystems, arbitrarily far from or close to equilibrium. In addition, nonequilibrium free energy theorems are covered with a rigorous exposition of each one. Throughout, the authors stress the physical concepts along with the mathematical derivations.
For researchers and students in physics, chemistry, materials science and molecular biology, this is a useful text for postgraduate courses in statistical mechanics, thermodynamics and molecular simulations, while equally serving as a reference for university teachers and researchers in these fields.

Denis J. Evans is professor of physics in the Department of Applied Mathematics, Research School of Physics and Engineering, ANU, Canberra, Australia. Having obtained his Ph.D. from ANU, he worked at Oxford and Cornell Universities and the NIST Boulder CO before taking up his present appointment. Professor Evans has authored 300 scientific publications and two research monographs. He has received numerous scientific awards, including the Boys-Rahman Lectureship of the Royal Society of Chemistry (London), and the David Craig medal of the Australian Academy of Sciences. He is also a Fellow of the Australian Academy of Sciences. Debra J. Searles received her PhD in Chemistry from the University of Newcastle, Australia. She held postdoctoral research positions at University of Basel, Switzerland, The Australian National University and University of Queensland, Australia. She joined Griffith University in 2000, becoming professor in 2009 and moved to the University of Queensland in 2012 where she has appointments in the Australian Institute for Bioengineering and Nanotechnology and the School of Chemistry and Molecular Biosciences. Since 2013 she has been Director of the AIBN Centre for Theoretical and Computational Molecular Science. She has 140 publications and is a Fellow of the Royal Australian Chemical Institute. Stephen R. Williams received his PhD in Physics from RMIT University in Melbourne. He was a postdoc at Utrecht University and has been at the Australian National University since 2003 where he is currently a Senior Research Fellow.
Loading...
or
Not Currently Available for Direct Purchase