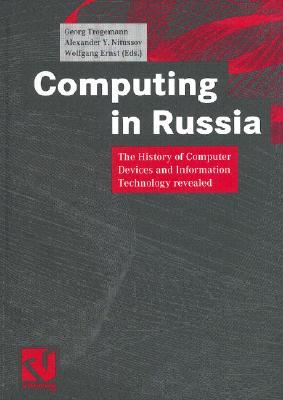 The History of Computer Devices and Information Technology Revealed

This book is the first compendium on the development of the computer in Russia to appear in the West. After briefly illuminating the history of Russian mechanical calculation devices, the book largely focuses on the first generations of (military and civilian) electronic computers, most of which were developed in the Soviet Union during the "Space-Race" and the Cold War, simultaneously with similarly fundamental developments in computing in the U.S.A. The reader is introduced to computers and cybernetics from mathematical, technical, social and cultural perspectives through archive material and through texts by some of the preeminent veterans of Russian computing (historians, engineers, military historians).

Georg Trogemann, professor for information sciences in the section for art and media-studies at the Media Art School, Cologne

Wolfgang Ernst, guest professor for the history, theory and aesthetics of media at the Institute for Film and Television Studies at the Ruhr-University, Bochum

Alexander Nitussov, engineer and translator in Moscow and Cologne
or
Not Currently Available for Direct Purchase
Copyright © 2020 American Booksellers Association