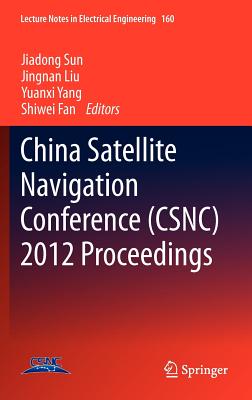 Proceedings of the 3rd China Satellite Navigation Conference (CSNC2012) presents selected research papers from CSNC2012, held on 15-19 May in Guanzhou, China. These papers discuss the technologies and applications of the Global Navigation Satellite System (GNSS), and the latest progress made in the China BeiDou system especially. They are divided into 9 topics to match the corresponding sessions in CSNC2012, which broadly covered key topics in GNSS. Readers can learn about the BeiDou system and keep abreast of the latest advances in GNSS techniques and applications.

SUN Jiadong (1929- )Sun Jiadong is the Chief Designer of the Compass/BeiDou system. He is an Academician of the Chinese Academy of Sciences (CAS), a fellow of the International Academy of Astronautics, and dean of the Aerospace Research Center of Xidian University. He graduated from Zhukovsky Air Force Academy in 1958. He has served as the director of the Ministry of National Defense's Rocket Overall Design Research Center, deputy minister of the Ministry of Aviation Industry, and director of the Scientific Committee of China Aerospace Industry Corporation. He now serves as a consultant to China Aerospace Science & Technology Corporation, the China National Space Administration, and the Ministry of National Defense's Scientific Committee. He is the chief designer of China's first missile, first man-made satellite, first remote sensing satellite, first returnable satellite, and of China's lunar orbiter project. He is also the chief engineer of China's communication satellite, meteorological satellite, resource observation satellite, and the Beidou navigation satellite. In 1999, he received an achievement medal in recognition of his contribution to China's "Two Bombs, One Satellite" projects; and in 2009, he received the nation's top Science and Technology Award.LIU Jingnan (1943 - )Liu Jingnan is an Academician of the Chinese Academy of Engineering and a professor at Wuhan University. He received his MS degree from Wuhan Institute of Surveying and Mapping in 1982, and served as the president of Wuhan University from 2003 to 2008. He has 11 years industrial experience and nearly 30 years academic experience in geodesy. His research interests lie in geodesy theories, methods, software and data processing, and he is an important figure in the application of global positioning technology in China. He was awarded the National Prize for Progress in Science and Technology in 1988 and 2001 for his remarkable contributions in GPS studies.YANG Yuanxi (1956 - )Yang Yuanxi is an Academician of the CAS and a professor at the China National Administration of GNSS and Applications. He graduated from Zhengzhou Institute of Surveying and Mapping in 1977, and received his MS degree in 1987. In 1991, he received his PhD degree from the Institute of Geodesy and Geophysics of CAS.He has served as the secretary of the International Association of Geodesy's Commission 4, deputy director of the China Geodesy Committee, and associate editor of the Journal of Geodesy. He has been awarded the National Outstanding Youth Fund, German Humboldt Scholarship, and has twice received the National Prize for Progress in Science and Technology. He has also led the projects "2000 national GPS geodetic controlled network data processing" and "national astro-geodetic and space network joint adjustment," and has published five monographs (three co-authored) and more than 200 papers.FAN Shiwei is a researcher on satellite navigation.
or
Buy Here
Copyright © 2020 American Booksellers Association