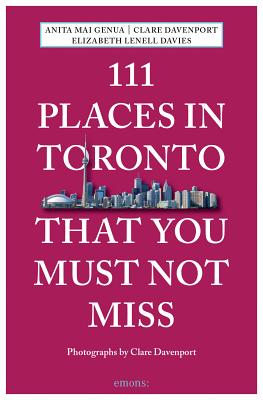 Anita Mai Genua is writer, educator and urban explorer. She is a native Torontonian and has worked at Canada's CBC Radio's National News as an editor. As a world traveler, wanderlust and storytelling have always appealed to her. Even in her youth, Anita enjoyed telling stories of her home when she helped co-ordinate an exhibit Life in Canada under the watchful eye of the KGB in glasnost era Soviet Estonia. She now lives in downtown Toronto. Clare Davenport has had a varied career as an analyst at Goldman Sachs, an international strategy consultant to the CEO of numerous businesses including, as of late, a national children's cancer charity. She is grateful for the amazing neighborhoods of Toronto, which have been her home for the last 20 years. Elizabeth Lenell Davies currently resides with her family in Toronto, where she teaches an architectural program for the arts organisation No.9, called "Imagining My Sustainable City" to thousands of youth in diverse neighborhoods. She is passionate about inspiring the next generation to envision building a sustainable Toronto.
Loading...
or
Not Currently Available for Direct Purchase