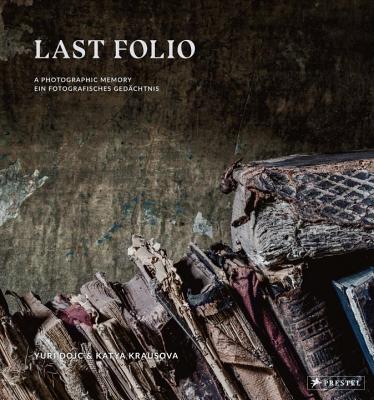 This personal and immensely moving collection of photographs taken decades after the Holocaust poignantly documents a once thriving culture that disappeared virtually overnight. The first country to adopt Nazi Germany’s anti-Jewish policies, Slovakia transported three-quarters of its Jewish population to concentration camps in a matter of months, including Yuri Dojc’s grandfather. Many years later, Dojc returned to his ancestor’s home, camera in hand. Serendipity led him to an abandoned Jewish school in eastern Slovakia, where time had stood still since the day in 1943 when all those attending were taken away to the camps. What he found inside, as well as in the abandoned synagogues and cemeteries he visited, were the remnants of a dynamic culture that disappeared in an instant. These haunting photographs of decaying books, fragments of the Torah, splintered gravestones and the vacant, crumbling building, evoke a lost way of life. The photographs’ vibrant colors, exquisite detail, and near abstract composition tell us more about how the people lived than how they died. Among the many hundreds of books and fragments, one stands out especially, one which miraculously found its way from dusty pile to its rightful heir, a book once owned by Yuri’s grandfather, Jakub. Beautifully reproduced in this volume, Dojc’s exquisite images are both artistically and historically powerful.

"Last Folio is a deeply moving and personal photographic journey to the past with photographs taken in the most exquisite detail with outstanding composition."


—The Last Word Book Review
"An unusual, intensely moving book about the Holocaust, without the images one typically expects. Czech-born Canadian photographer Dojc returns to his ancestral home to photograph an abandoned synagogue and a Jewish school in eastern Slovakia. Inhabitants of these buildings were deported to concentration camps in 1942, leaving behind books, religious scrolls, and other items that have remained in place over the decades, evoking with great poignancy the ghosts of the vanished."


—Library Journal
"The narrative, though mostly visual, turns on a pair of coincidences revealed in Katya’s short piece, which adds poignancy and verve to this gorgeously disturbing book. Indeed, the volume is mostly about books&mdash;ruined books, scraps of books, sacred calligraphy, and the buildings that contained them." &mdash;ArtsJournal