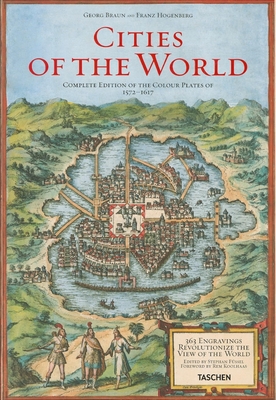 Cities of the World (Hardcover)

Google Earth's ancestor: a snapshot of urban life, circa 1600 History's most opulent collection of town maps and illustrations The complete reprint of all 363 color plates from Braun and Hogenberg's survey of town maps, city views, and plans of Europe, Africa, Asia and Central America, with dozens of unusual details, as well as selected extracts from the original text and an in-depth commentary. First published in Cologne 1572-1617.

More than four centuries after the first volume was originally published in Cologne, Braun and Hogenberg's magnificent collection of town map engravings, Civitates orbis terrarum, has been brought back to life with this reprint taken from a rare and superbly preserved original set of six volumes, belonging to the Historische Museum in Frankfurt. Produced between 1572 and 1617 - just before the extensive devastation wreaked by the Thirty Years' War - the work contains 564 plans, bird's-eye views, and map views of all major cities in Europe, plus important cities in Asia, Africa, and Latin America. Edited and annotated by theologian and publisher Georg Braun, and largely engraved by Franz Hogenberg, the Civitates was intended as a companion volume for Abraham Ortelius's 1570 world atlas, Theatrum orbis terrarum. Over a hundred different artists and cartographers contributed to the sumptuous artwork, which not only shows the towns but also features additional elements, such as figures in local dress, ships, ox-drawn carts, courtroom scenes, and topographical details, that help convey the situation, commercial power, and political importance of the towns they accompany.

The Civitates gives us a comprehensive view of urban life at the turn of the 17th century. This nice-price edition of our reprint includes all of the city plates, accompanied by selected extracts from Braun's texts on the history and contemporary significance of each urban center as well as translations of the Latin cartouches. A detailed commentary places each city map in its cartographical and cultural context, and examines earlier sources and later editions. Rounding off this comprehensive publication is a separate introductory essay examining the Civitates in its cultural and historical context. From Paris and London to Cairo and Jerusalem, readers will find many a familiar city to zoom back in time to and explore - in fact, many of the maps can still be used for orientation in historical town centers today.

Stephan Fussel is director of the Institute for Book Sciences at the Johannes Gutenberg University in Mainz, and holder of the Gutenberg Chair at the same university. He has published prolifically on the early days of printing, the sale and publication of books between the 18th and 20th centuries, and the future of communications.
or
Not Currently Available for Direct Purchase
Copyright © 2020 American Booksellers Association