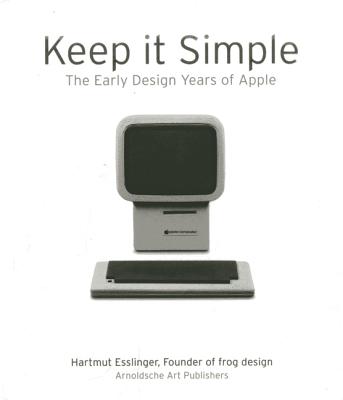 The Early Design Years of Apple

- The true design story behind the evolution of Apple computers - An inspiring collaboration of Steve Jobs and author Hartmut Esslinger - 380 illustrations that takes a step by step view of the most famous brand that's still a dominating force today Keep it Simple is the authentic story of the collaboration between Steve Jobs and Hartmut Esslinger, which began in 1982. The result of this partnership between entrepreneur and designer was revolutionary, in terms of historic dimensions: Steve Jobs was the first to make strategic design the core of Apple's Business Strategy. From this, Apple grew from a technology focused company into one of the world's most successful, global brands and this was achieved by creating and delivering innovative and intelligent products. Of course, there are many books about Steve Jobs and Apple. Professionals everywhere want to be like him - or want their company to succeed like Apple - so they compulsively absorb accounts of his work, hoping to find the magic recipe. For those readers this book is a first, because it tells the story of Apple's evolution from the inside and its initial conception, when Steve was first driven by the power of design to establish it as the strategic core of Apple's business model. This book is also for the millions of Apple users, admirers, fans, and critics who may be curious about the origins of the products and the brand they feel so deeply about. Here is the story of the most amazing creative journey, which had to overcome tremendous opposition, both inside Apple and across the wider technology industry.

Hartmut Esslinger is founder of frog design, inc., a leading global innovation firm, and one of the most respected designers and business consultants in the world. Esslinger sparked a design revolution when he founded the company in his native Germany, around the guiding principle 'form follows emotion'. His work has defined the modern consumer aesthetic with such revolutionary products as the Apple Macintosh computer, Sony's Trinitron television, Lufthansa's brand and fleet image, Disney's Cruise Lines and Consumer Electronics, and Louis Vuitton's brand aesthetic.His designs are in the Museum for Modern Art and the Whitney Museum in New York. He is also Founding Professor of the Hochschule fur Gestaltung, Karlsruhe, Germany, and was Professor for Convergent Design at the University of Applied Arts, Vienna, Austria.
Loading...
or
Not Currently Available for Direct Purchase