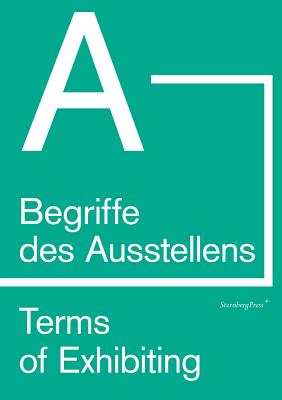 This publication explores themes of the exhibition through its terms--not, however, to confine into isolated conceptual categories, but to interconnect. These terms characterize exhibiting and emphasize a "between-ness." Examining a term lays bare its ruptures, shifts, or recreations, as well as social, societal, and cultural changes that have the power to structure through historical conjecture.

Almost fifty terms relevant to the making and discussion of exhibitions today have been compiled in Terms of Exhibiting (from A to Z), contributed by Liam Gillick, Manfred Hermes, Wojciech Kosma, Clemens von Wedemeyer, Tobias Vogt, Jochen Volz, and June Yap, among others. Six essays investigate key terms raised by the three-part exhibition series "Terms of Exhibiting, Producing, and Performing" at Kunsthaus Dresden in 2012. Jan Verwoert reflects on the division of labor in artistic production, while Anke te Heesen presents a survey of the museum, collection, and exhibition. Markus Miessen discusses the advantages of curating institutions and inventing structures rather than merely implementing or appropriating them. The book also includes essays by Kirsten Maar, Ursula Panhans-B hler, and Lee Weng-Choy. Each of the twelve conversations with various artists places one term under scrutiny within the context of their own artistic interests and practices--with reference to the term presence, Daniel Knorr explains the significance of materialization for his own creative process, while Brian O'Doherty discusses invention in relation to his practice. Each term generates further insight and reflection into each individual art practice.