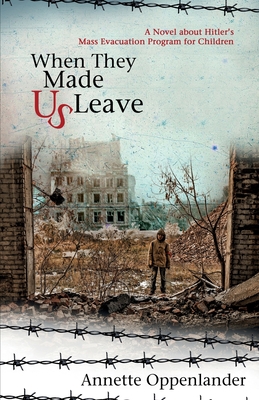 When They Made Us Leave

A Novel about Hitler's Mass Evacuation Program for Children

Based on true-life accounts of particpants in the wide-sweeping and much-loathed children's evacuation program of Hitler's Germany, award-winning 'Surviving the Fatherland' author Annette Oppenlander offers another heart-wrenching contribution to the history of the children's war.

When They Made Us Leave tells the touching love story of Hilda and Peter, whose budding relationship ends abruptly when they are forced to attend separate evacuation camps during WWII. Each confronted with terror and cruelty as well as unexpected kindness, they must rise above to survive the war and find each other once more.

Solingen, 1943: As bombs carpet Germany and fourteen-year old Hilda is falling in love with her childhood friend and next-door neighbor, Peter, he excitedly takes off to an evacuation camp in Pomerania, six hundred miles from home. Though Peter soon finds that his expectations are far from reality, he is ordered to write happy letters home, even when things take a turn for the worse and a new Hitler youth leader attempts to convert camp into a military battalion.

Meanwhile, Hilda must unwillingly accompany her classmates to a cloister in Bavaria run by a draconian Abbess. There Hilda struggles to overcome her homesickness and yearning for Peter while helping a classmate hide her bedwetting accidents.

As Germany is buried under rubble and supplies shorten, Peter lands at an inn near Gdansk. By now, all he wants is to go home. But his new teacher, a staunch national socialist, deems their place safe despite the refugees from the east whispering of German defeat by an advancing Russian Army.

When the cloister is converted into a German field hospital, enemy planes destroy Hilda's homebound train and kill her teacher. Weeks later, tired and hungry, she arrives home to find her mother safe. But Peter has not returned, nor is there any news of him. Refusing to believe the worst, she must survive in a barely recognizable world.