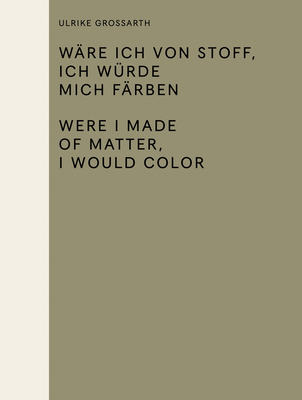 Wäre Ich Von Stoff, Ich Würde Mich Färben / Were I Made of Matter, I Would Color

This book is published on occasion of Ulrike Grossarth's eponymous retrospective at the Generali Foundation in Vienna. Both the book and the exhibition trace the evolution of Gossarth's practice, with a particular emphasis on her training as a dancer in the 1970s, to draw connections between the early years with her sculptural settings and actions and her most recent work, which engages with history more generally.

In her contributing essay, Ulrike Gossarth states that the title--Were I Made of Matter, I Would Color--is a counter-model to the fundamental Descartian formula "I think therefore I am," a position which exists between consciousness and disembodiment, in a state of incompleteness. Rainer Borgemeister discusses the artist's actions from 1978 to 1987, which were preceded by her critical engagement with modern dance. Further contributions from Mieke Bal, Michael Glasmeier, and Elliot R. Wolfson discuss Grossarth's practice in relation to history, the body, and polymorphism.

Copublished with the Generali Foundation, Vienna