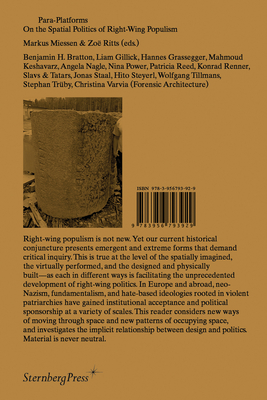 On the Spatial Politics of Right-Wing Populism

An investigation of the social, spatial, and material reality of right-wing populism.

Para-Platforms investigates the social, spatial, and material reality of right-wing populism. Three case studies--presented in a symposium organized by Markus Miessen at the Gothenburg Design Festival in November 2017--form the core from which this collection of essays has grown: journalist Hannes Grassegger on Trump and Brexit; architectural theorist Stephan Tr by on spaces of right-wing extremism in Germany; and Christina Varvia on Forensic Architecture's investigation of the murder of Halit Yozgat, a young German man of Turkish descent, at the hands of a far-right group in 2006. The presentations are reproduced along with the ensuing conversations with Miessen and the audience members.

An essay by anthropologist Mahmoud Keshavarz opens the book by discussing the capacity of design to create the conditions for certain politics. Among the other theoretical, artistic, and historical contributions, editor Zo Ritts interviews artist Wolfgang Tillmans regarding his pro-EU poster series, the ongoing project truth study centre, and guest-edited volume What Is Different? The volume concludes with a comic by artist Liam Gillick animating a block of granite--culled from the Swedish quarry responsible for extracting the red granite intended for the Third Reich's architectural ambitions--as the messiah of spatial and material politics.