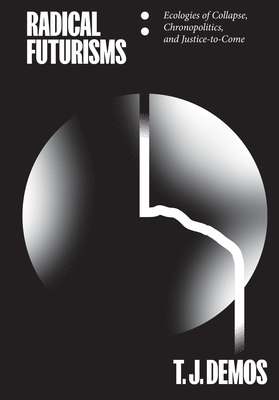 What comes after end-of-world narratives: visions of just futurity and multispecies flourishing.

There is widespread consensus that we are living at the end—of democracy, of liberalism, of capitalism, of a healthy planet, of the Holocene, of civilization as we know it. Drawing on radical futurisms and visions of justice-to-come emerging from the traditions of the oppressed—Indigenous, African-American, multispecies, anti-capitalist—as materialized in experimental visual cultural, new media, aesthetic practices, and social movements, in this book. T. J. Demos poses speculative questions about what comes after end-of-world narratives, arguing that it's as vital to defeat fatalistic nihilism as the false solutions of green capitalism and algorithmic governance.

How might we decolonize the future, and cultivate an emancipated chronopolitics in relation to an undetermined not-yet? If we are to avoid climate emergency's cooptation by technofixes, and the defuturing of multitudes by xenophobic eco-fascism, Demos argues, we must cultivate visions of just futurity and multispecies flourishing.

T. J. Demos, an award-winning writer, is Professor of Visual Culture at the University of California, Santa Cruz and Director of its Center for Creative Ecologies. He writes widely about contemporary art, global politics, and ecology, and is the author, most recently, of Against the Anthropocene: Visual Culture and Environment Today (Sternberg Press).
Loading...
or support indie stores by buying on