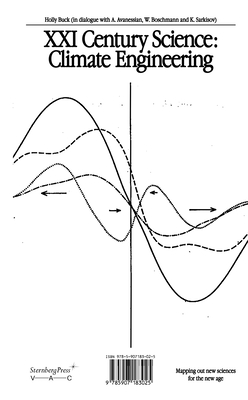 An examination of schemes for large-scale interventions in Earth's natural systems—oceans, soils and atmosphere—to reduce the adverse effects of climate change.

Geoengineering refers to large-scale schemes for intervention in Earth's natural systems—oceans, soils and atmosphere—in an attempt to reduce the adverse effects of climate change, be it through solar radiation management, carbon dioxide removal or otherwise. Some critics consider this approach problematic as it is oriented towards technological solutions for global heating without reconsidering dominant economic and political structures, mitigation and restoration being understood merely in terms of such innovative fixes as injecting aerosols into the stratosphere. Its advocates argue that there actually is a way to build “a good Anthropocene,” one that would allow for a socially and ecologically desirable future. In this case human action fulfills the role of Plato's proverbial pharmakon—both the poison and the cure.

Edited in dialogue with Holly Buck

Copublished with the V-A-C Foundation

Holly Buck is a postdoctoral research fellow at the Institute of the Environment and Sustainability at the University of California, Los Angeles.

Stephen H. Schneider was Melvin and Joan Lane Professor for Interdisciplinary Environmental Studies and Professor of Biology at Stanford University. He was also Coordinating Lead Author of the IPCC's working group on Impacts, Adaptation, and Vulnerability, from 1997 to 2001, and, with his IPCC colleagues, was awarded a joint Nobel Prize in 2007. He was the author or editor of many books, including Science as a Contact Sport: Inside the Battle to Save Earth's Climate and Scientists Debate Gaia: The Next Century (MIT Press, 2004).

James Meadowcroft is Professor in the Department of Political Science and in the School of Public Policy and Administration at Carleton University, Ottawa.

Bruno Latour, a philosopher and anthropologist, is the author of We Have Never Been Modern, An Inquiry into Modes of Existence, Facing Gaia, Down to Earth, and many other books. He coedited (with Peter Weibel) the previous ZKM volumes Making Things Public, ICONOCLASH, and Reset Modernity! (all published by the MIT Press).
Loading...
or support indie stores by buying on