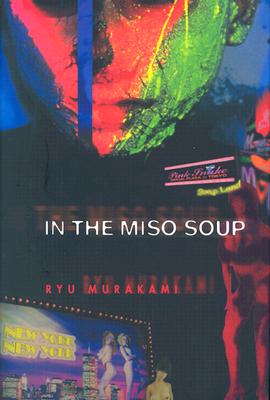 In the Miso Soup

It is just before New Year's. Frank, an overweight American tourist, has hired Kenji to take him on a guided tour of Tokyo's sleazy nightlife on three successive evenings. But Frank's behavior is so strange that Kenji begins to entertain a horrible suspicion: that his new client is in fact the serial killer currently terrorizing the city. It isn't until the second night, however, in a scene that will shock you and make you laugh and make you hate yourself for laughing, that Kenji learns exactly how much he has to fear and how irrevocably his encounter with this great white whale of an American will change his life. Kenji's intimate knowledge of Tokyo's sex industry, his thoughtful observations and wisecracks about the emptiness and hypocrisy of contemporary Japan, and his insights into the shockingly widespread phenomena of compensated dating and selling it among Japanese schoolgirls, give us plenty to think about on every page. Kenji is our likable, if far from innocent, guide to the inferno of violence and evil into which he unwillingly descends-and from which only Jun, his sixteen-year-old girlfriend, can possibly save him...

RYU MURAKAMI was born in 1952. The only son of schoolteacher parents, he grew up in the port city of Sasebo in southwestern Japan. After graduating from a local high school, where he played the drums in a band called Coelacanth, he went to an art college in Tokyo. It was while studying there that he entered his first novel, Almost Transparent Blue, in a competition for new writers. Published in 1976, the book won a major literary award and sold over a million copies. Since then, he has worked for a publishing house, presented a weekly music and interview radio program, and hosted a TV talk show. His literary output includes two collections of stories Run, Takahashi (1985) and Topaz (1988), and the novel Coin Locker Babies (1980), which made its debut in English early in 1995. His roman a clef 69 appeared in English in 1993. He has also directed four movies based on his writing, causing a sensation at an Italian film festival when Tokyo Decadence was shown there in 1992. His latest film is set in the U.S. and Cuba.
Loading...
or
Not Currently Available for Direct Purchase